” I did 30 years in the Corps,” the Marine declared proudly, “and fought in three of my country's wars. Fresh out of boot camp, I hit the beach at Okinawa, clawed my way up the blood-soaked sand, and eventually took out an entire enemy machine gun nest with a single grenade. As a sergeant, I fought in Korea with General McArthur. We pushed the enemy inch by inch all the way to the Chinese border,always under a barrage of artillery and small arms fire. Finally as a gunnery sergeant, I did three consecutive combat tours in Vietnam. We humped through the mud and elephant grass for 14 hours a day, plagued by rain and mosquitoes, ducking sniper fire by day and mortar fire all night. In a Firefight, we'd fire until our arms ached and our weapons were empty, then we charged the enemy with bayonets.” read more 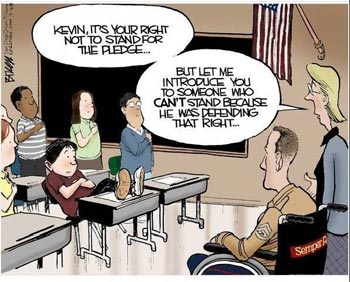 On March 31, 2011, Clay Hunt, a 28-year-old Marine veteran who had served with great honor in Iraq and Afghanistan, receiving a Purple Heart, finally succumbed to the psychological fallout of that service, killing himself in his Sugar Land, Texas, apartment. read more

The sheer panic of people trying to flee the Japanese tsunami has been captured in a newly-released video that shows the life and death race to outrun the wave.

THE setting could have been any typical Central European beer garden. There were long rows of wooden tables stained in dark, rich hues; half- and full-liter beer mugs hanging from metal racks; and two beautifully crafted brass decoction tanks used for mashing traditionally brewed beer. But on this warm afternoon in November, I wasn’t in Plzen, or Munich, or Bruges. I was at the Hoa Vien Bräuhaus in Ho Chi Minh City, Vietnam. read more

I just read on the Internet that the 9th District Court of Appeals has upheld a lower court ruling that the Stolen Valor Act is unconstitutional. Apparently it is OK to lie about military service, but a crime to make heated, loose-liped remarks against an elected official. The Courts would have us believe that Freedom of Speech is absolute, but we know differently. read more

B17 and B25 WWII Bombers over and around Arizona's Superstition Mountains and Saguaro Lake.  The photography is HD, the planes are gorgeous, and, most notably, it is shot as the B17 takes off from Falcon Field in Mesa, AZ and then flies over the Superstition Mountains.  to the east of Apache Junction and then on to Roosevelt & Canyon lakes on the east edge of the Phoenix valley.  The backdrops are stunning.  Music is from the mini series John Adams.  Great combo. read more