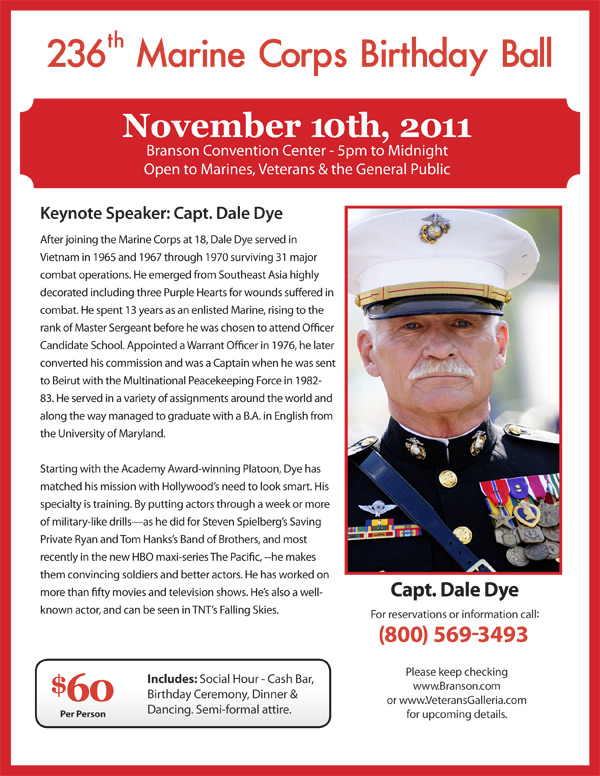 After joining the Marine Corps at 18, Dale Dye served in Vietnam in 1965 and 1967 through 1970 surviving 31 major combat operations. He emerged from Southeast Asia highly decorated including three Purple Hearts for wounds suffered in combat. He spent 13 years as an enlisted Marine, rising to the rank of Master Sergeant before he was chosen to attend Officer Candidate School. Appointed a Warrant Officer in 1976, he later converted his commission and was a Captain when he was sent to Beirut with the Multinational Peacekeeping Force in 1982-83. He served in a variety of assignments around the world and along the way managed to graduate with a B.A. in English from the University of Maryland.

Starting with the Academy Award-winning Platoon, Dye has matched his mission with Hollywood’s need to look smart. His specialty is training. By putting actors through a week or more of military-like drills—as he did for Steven Spielberg’s Saving Private Ryan and Tom Hanks’s Band of Brothers, and most recently in the new HBO maxi-series The Pacific, –he makes them convincing soldiers and better actors. He has worked on more than fifty movies and television shows. He’s also a well-known actor, and can be seen in TNT’s Falling Skies.

For reservations or information call