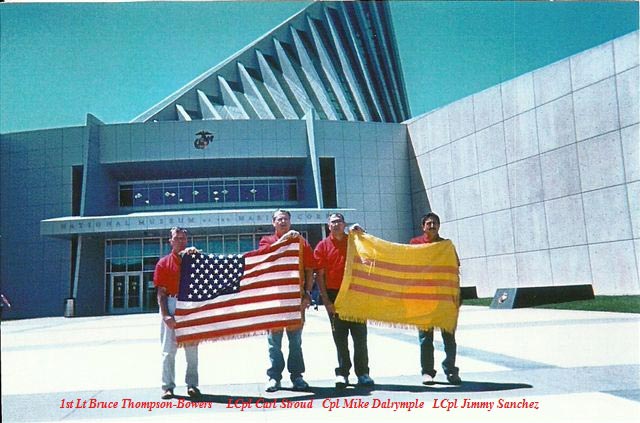 The attached picture was taken at the National Museum of the Marine Corps in
Quantico, VA on April 29, 2010. This day was the 35th anniversary of The Fall of Saigon.

The flags in the picture are from a quarter deck in the DAO compound Saigon South Vietnam;
1st Lt Bruce P. Thompson – Bowers had taken possession of the American and South Vietnam flags during our mission in support of The Marine Detachment at The United States Embassy in Saigon South Vietnam commencing April 25, 1975 and prior to our platoon be relieved in the late afternoon  of April 29th 1975.

Presenting the flags to the Marine Corps Historical personnel on April 29, 2010 are members of
The 3rd Platoon from L to R

Also if anyone knows the whereabouts of the Marines from our platoon please have them contact the following Marines: