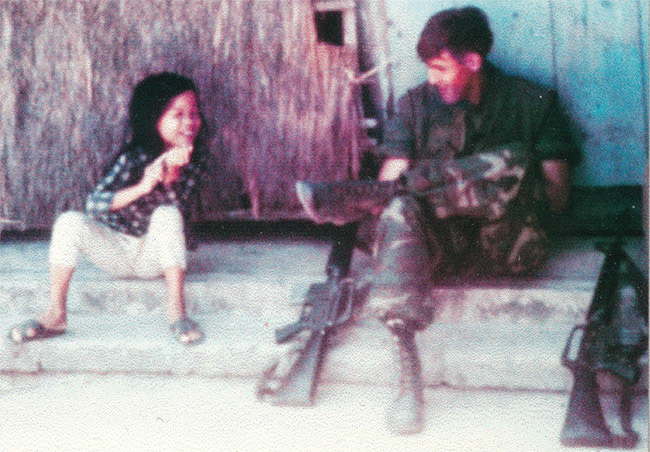 This is Doug Norman from New York City. We were on one of our perimeter patrols. Also known as a “skivvy run patrol”. Not a whole lot happened on these patrols. This is one of my favorite photos. Something about the American Marine and small Vietnamese girl in a war zone having a moment. I had been there awhile when this pic was taken. But on my first such patrol was all but boring. I had not been in country more than a week or so. They need a radio operator so the Comm Sgt picks me. A Sgt E-5 usually lead the patrol, so I am following him with my PRC-25 proudly on my back. Being my first time most likely making numerous radio checks to appear as if I know what I’m doing, which I didn’t. We come to an area where we have to walk the rice paddy dikes. They’re wet or damp, but we are making our way. Now when you see the villagers working the rice paddies the water comes up to about their knees, so a rational person would conclude that is the depth. Well, let me tell ya that aint so. Each field has a water reservoir in one corner that is 8-10 feet deep. I am walking the slippery dike and this dumb-asz FNG Okie slips off the dike. Yep into the 8-10 foot area. Now as I slip off I’m thinking I will hit bottom soon, but before I know it I’m under water with a rifle, radio, ammo etc… After I get past WTF, I think of what they will tell my Mother. Your son drowned in a rice paddy. My mother being kinda of no non-since would have thought something like how did my dumb-azs son die in 6 inches of water? With all the gear I was not able to get out on my own so I stick my arm straight up and the Sgt grabs me and pulls me out. In true Marine Corps Sgt form he looks me over quickly then asks if the radio is still working. I do my 47th radio check of the day and off we go.