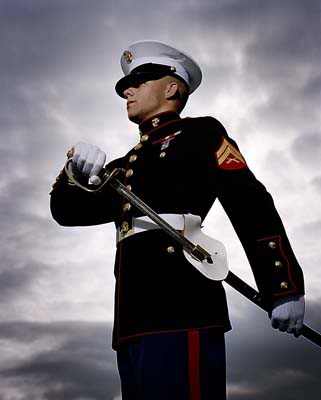 1.  Can cuss for ten minutes without ever repeating a word.

3.  Can play a cherry Lieutenant like a finely tuned instrument.

5.  Has eyes in the back of their heads.

8.  Doesn’t know how to be politically correct.

9.  Doesn’t give a damn about being politically correct.

10.  Thinks that “politically correct” should fall under “sodomy” in the UCMJ.

11.  Love deployments because there is less paperwork and more “real” work.

13.  Does not fear women in the military.

16.  Can tell you anything you want to know about an M1911A1 even though they are no longer in the inventory.

17.  Believes that they do have a rendezvous with destiny.

18.  Believes that “Nuts” wasn’t all the Brigadier General McAuliffe said to the Germans at Bastogne.

22.  Can remember when faggots weren’t a “minority group”.

23.  Would have paid money to see Custer getting his clocked cleaned.

24.  Really doesn’t like taking shit from those who haven’t “been there”.

25.  Knows how to properly construct a field latrine.

28.  Might admire the Germans, but still realizes they got their asses kicked.

29.  Aren’t afraid of the Chinese, who probably don’t have enough rowboats to invade Taiwan.

33.  Have enough BDU’s in their closet to start a surplus store.

35.  Are convinced that “wall to wall” counseling really works.

36.  Have  more time on the frontline that most others have in the chow line.

37.  Knows how to make coffee when the measuring scoop goes missing.

38.  Knows that it’s not good coffee when you can see through it.

40.  Knows that shitty leaders will always say they have shitty soldiers.

41.  Never takes a word from any officer without a hard copy.