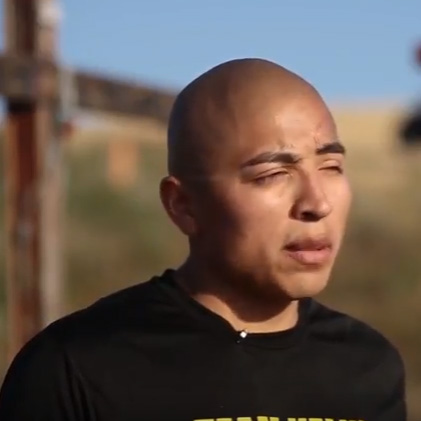 Part of the event involved a trek over a steep hill known as First Sergeant’s Hill where several crosses have been placed in honor of Marines, all members of Barron’s unit, killed while on deployment.

“I had told myself I want to see those crosses, and it took me five years to get up there. I knew I had to get up there some way some how,” said Barron.

In the video, you see him crawling on his hands on one leg after he had taken his prosthetic left leg off. It shows incredible grit and determination.

“The leg wasn’t working the way I wanted it to work, so I just took it off and kind of crawled on my arms and one leg.”

While in Afghanistan, Barron was injured when a fellow Marine stepped on a roadside bomb. He lost his left leg and left eye.

“I can’t let my amputation and my eye slow me down,” he told FOX 5.

Barron says he is humbled by the attention the video is getting and hopes it serves as inspiration and motivation for fellow Marines who may be contemplating suicide, something several members of his unit have done.

Watch the video at: https://youtu.be/1Z1qurJ0iYA

15 thoughts on “An Inspiration To Fellow Marines”