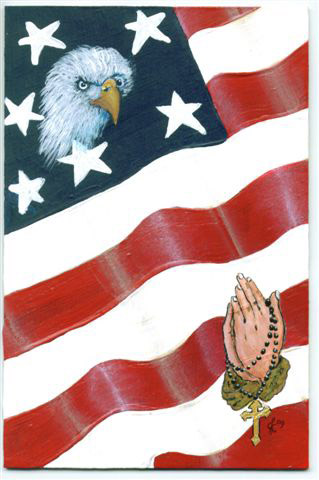 I am the mother of two fine men who both have the honor of being called United States Marines! My oldest son, Cpl. Jonathan Rolfes, served from 2003 to 2008. Jonathan fought with 1st Recon. in Iraq for three deployments. His claim to fame is on the internet following a mishap with a Camel Spider! You can actually see his bite/wound at: http://www.camelspiders.net/camel-spider-bite.htm. My other son, LCpl. David Rolfes, joined the Marine Corps in 2008; just months after his brother got home! David is currently on his first deployment over seas in Afghanistan. He is serving with 1/6 2nd Marine Div., H&S Co., Motor-T Platoon. Before leaving to Afghanistan, David went out and got himself a new tattoo. The tattoo is an image of a soldiers hands in prayer while holding his precious rosary. I wanted to share with you the shadowbox picture frame that I painted; using the image of my son, the United States Flag, and his tattoo. I am very proud of both of my sons.