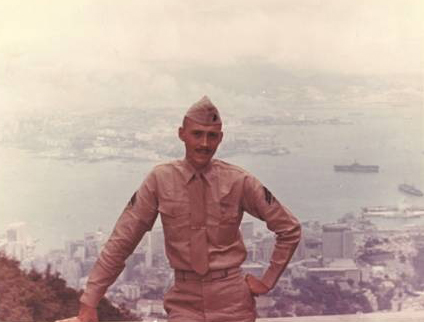 Graduating Boot Camp at MCRD San Diego in 1961 we were issued Khaki's, Summer Tropical and the Winter Green uniforms. Summer Tropicals were the favorites back then, but we often wore the Khaki's. Floating around the South China Sea in the Spring of 1964 in 2/9, we had to make ourselves presentable for Liberty, in the Khaki Uniform. Keeping them presentable with only a sea bag to stow our gear was a problem, but we did survive. We got into Hong Kong on several occasions and one of our destinations was the top of Victoria Peak for lunch and drinks. I had made Corporal the previous fall, just after JFK was killed, and was now "authorized" to wear a mustache… haven't shaved it in the intervening 50 years.

In the background of the picture, you can see the original LPH-2, USS Iwo Jima the first ship designed as a Helicopter Assault Ship – it was practically brand new having been commissioned in 1961. Compared to all the old WW2 APA Troop Assault Ships we had been on, we felt this was almost a "cruise ship" experience for us.

After completing this tour in Mid-1964 I reported into the US Marine Corps Recruiting Station Los Angeles, CA, for 3 years. The first thing we did was take a drive out to MCB Barstow where I was fitted for several sets of Dress Blue Uniforms. In those days our Uniform of the Day was the White Barracks Cap, Summer Tropical Shirt and Dress Blue trousers. As we often had "special duty" we utilized the complete Dress Blue Uniforms at all sorts of events – there were a group of us who were the "official" Color Guard for the Los Angeles Rams Football team from 1964-1967, and also at the First Super Bowl in Pasadena, CA. Those Dress Blues came in mighty handy! We even let the Navy in some of the time.