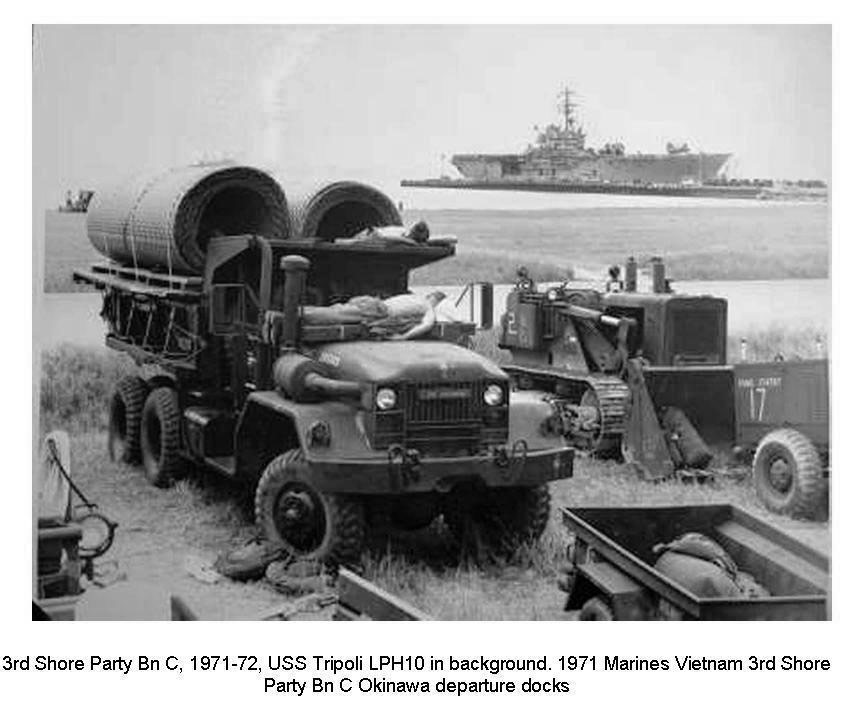 While surfing Marine sites on the web I came across this picture of Marines from Co. C, 3rd Shore Party Bn. taken in Okinawa in 1971. I served with Co. A, 3rd Shore Party at Dong Ha, among other locations in Vietnam 1966/1967. When I left Okinawa in August, 1967, Co. C and Co. A were side by side in the same area.

Note the rolls of beach matting on top of a 5-ton truck. They appear to be made of a type of composite fiberglass material. Before the fiberglass matting was used Shore Party used a “chain link” type matting that folded and fit into the back of a 5-ton truck accordion style. The truck was equipped with a frame that came over the cab and down in front of the front bumper. When landing on a sandy beach enough of the matting was pulled down over the frame to allow the front wheel to roll onto the matting. When the truck was driven across the beach it laid down the matting to create a makeshift roadway for other vehicles to drive across without making ruts or getting bogged down in the sand.

Now for my interest in the picture. When I came back from Vietnam in the summer of 1967, I was assigned to Co. C, 2nd Shore Party Bn at Camp Lejeune, NC. One morning I was called to the Company Office and told that we had a section of a fiberglass type beach matting that the Marine Corps wanted to test because they were considering replacing the older close woven chain link type matting. Another Marine and I hauled the test section, approximately 20 to 30 feet long and a little wider than a 6X, out to Onslow Beach. We were directed to lay the beach matting on the sandy beach and drive over it for the rest of the day and record how many passed we made. For an entire day, I drove the 6X back and forth over the matting while the other Marine recorded each pass we made. I treated it pretty ruff, slamming on the brake several times while on the matting. I would drive across it, make a tight circle and drive back across it. I don’t remember how many passes we made but we were out there all day running back and forth over the beach matting.

At the end of the day we took the matting back to the 2nd Shore Party Bn office along with the report of how many passes were made across it. I never did know what the results of the test were or what the decision was made until I ran across this picture. So, I take it from the picture that the fiberglass beach matting was procured to replace the heavy cumbersome metal matting.

One thought on “Beach Matting”