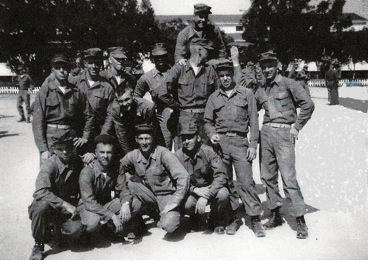 It would be a nine day voyage on the USS George Clymer from San Diego to Pearl Harbor, but first we had to spend a month or so at Area 13, Camp Pendleton, a staging Battalion for over 600 Marines waiting to be shipped out to Pacific duty stations. It was April, 1961, and Area 13 was hilly, hot, and dry. In order to keep all these young Marines busy the Officers and NCOs had us run up and down those brown hills several times a day, whenever we weren’t field daying the barracks.

One day our Officer of the Day, a young Lieutenant, came up with an enterprising idea to keep us busy without all that running up and down hills. We would water the tree. The tree was in the yard in front of the barracks and the outside spigot was in the rear of the barracks. There was no hose, but we did have a bucket. Aha! We would use the bucket to water the tree. But how do you keep a hundred or so Marines on task with only one bucket? Our Lieutenant had the answer.

The first Marine was stationed at the tree and the last Marine was stationed at the spigot. In between these two the rest of the Marines snaked around the barracks twice in single file. The bucket would be filled with water at the spigot and passed from Marine to Marine twice around the barracks until it arrived at the tree where the first Marine had the honor to do the watering. Then the bucket was passed along the same route in reverse where it was refilled and sent back along its way. Thus, we spent an afternoon at Camp Pendleton in productive labor saving the Area 13 barrack’s tree.

Sgt Grit wants to hear from you! Leave your comments below or submit your own story!

One thought on “Before they were Plane Captains at Camp Pendleton”