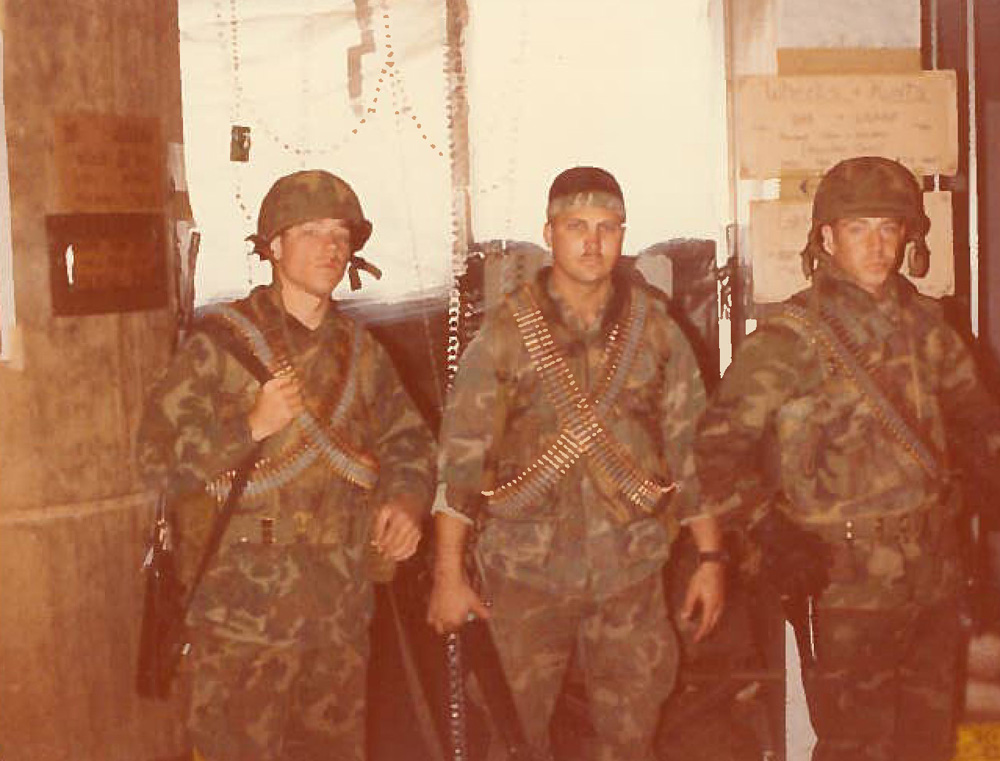 Attached are three more photos circa 1982-83. The top photo is one of (left to right) Narvel Don Hesson, me, and Tim Wheeler getting ready to link up to one of the “Rock” squads for an evening patrol. “Rocks or Rock-heads” is the slang term that we slapped on the 0311s and was used by the 0331s, 0341s and 0351s. We called them Rocks to their faces and of course got the customary “f-ck you aszhole” in return, but they knew we loved em! LOL Now… I say this tongue in cheek today and I know that all former and current 0311’s who read this are going to want to strangle me, but as you can probably ascertain from my mere mentioning of the term Rock, it was a direct reference to intelligence or lack thereof. Hey, don’t shoot the messenger Marines! Something tells me I am going to pay dearly for this post! LOL.

Anyway, the second photo is of one of the out-post several miles away from our compound on the outskirts of downtown Beirut. We always had an M60 on this post, and this location was one that was manned by several Marines during the daytime hours with two Marines on the gun for two hour watches. I recall there being a few huge trees where we could take cover away from the sun when not on watch and it was boring as h-ll, but this was one of the few locations that we did not guard the entire time we were in Beirut. Not sure why though, but this did not hurt my feelings at all because I always had the feeling we were being watched. Of course, we were being watched and you could always just tell by the seedy individuals that were passing by, but I never really understood the reason for us manning this post in the first place. Not much was told to us, but this was one of the few where a SNCO accompanied the Marines on post. (Virgil Howard if you read this post, please provide more details if you recollect them, or correct me if my memory is clouded a bit.)

The third photo is of me on machine gun watch on the ship on the way back to Beirut for my second tour. I don’t recall us doing this on the first cruise, but on the second cruise all the 0331’s were cross-trained on all of the ship’s machine guns and we manned these gun post 24 hours as soon as we left the last liberty port and headed back to Beirut (or anytime the ship went into General Quarters before we went into Beirut). This particular weapon was a 40mm machine gun and the round was similar to if not the same as the round fired from the M203 grenade launcher, if I am not mistaken. It had a very slow rate of fire but was fun to fire. During our training the Navy was very generous as to the amount of rounds we fired out into the water. Check out the hair on my grape. This had to be at or near Marine Corps regulations. I rarely wore a High-N-Tight after boot-camp, but usually kept my hair on the shorter side as I recall. I guess they let up a bit while we were on the ship, but that’s a hairy grape if you ask me. Semper Fi Jarheads!