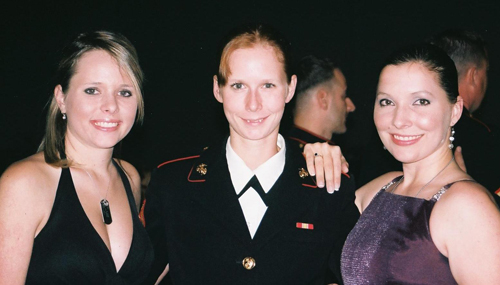 Sgt. Grit, I have two stories to share with you today:

This past weekend I was headed to the Marine Corps Ball, alone. My three young boys and I had a 4 hour trip to make to get there. Part way through, we stopped to get some supper. We were standing in line, and I was trying to keep my boys IN LINE, when a young man ahead of me commented that I really had my hands full. Feeling a little agravated, I replied that I certainly did, especially since their dad is in Iraq. He immediately focused his attention on me, and started asking all about my husband. I was a little bemused, until he pulled off his jacket to show me the Marine Corps shirt he was wearing. I chatted with him and his girlfriend for a few minutes, then they went to pay for their food. When I finally made it to the head of the line, that former Marine was still standing there. Sgt. Grit, I'm not much of a crier, but I certainly choked up when he insisted on paying for all of our meals that night. I thanked him from the bottom of my heart…his reply? "It's the least I can do. I never went over, and here there are guys leaving their wives and kids. You just tell your husband thank you." I duly passed on those thanks, and the story that proves your brotherhood. 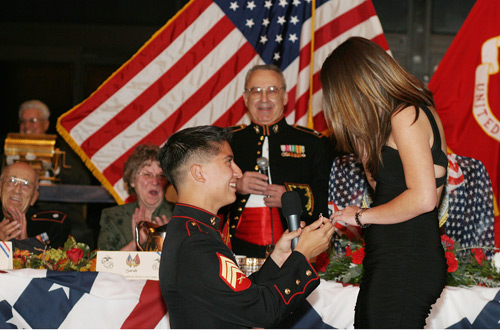 Just sharing: At our annual 233rd Celebration of the Birthday of the Corps (over 200 in attendance) one of our guests from the Phoenix Valley, an active duty recruiter, Sgt. Allen Casanova, stepped forward on the dance floor, got down on bended knee, proposed to his date, she accepted and we all stood and applauded to the playing of the Marine Corps Hymn. 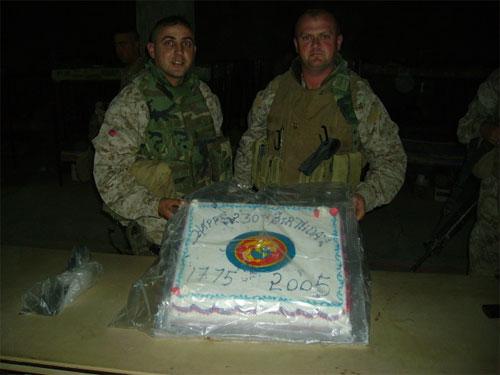 OK last year I got to wake up with my beautiful wife at Parris Island and go get a sweet Eagle Globe and Anchor Tat on the MC Birthday and I thought to myself this is the best one yet. I was wrong. Tonight I ran the gauntlet through Karmah a crappy little town next to Fallujah that keeps us busy taking care of Ali baba and all the Misters on a regular basis, not a good place. But it is a place that hold 4 small AO's with small detactments of Marines, who live the basic life and get 2 hot meals a week. BUT it the dang Corps Birthday, 230 years of taking the garbage out, so those boys deserve their cake just like all Marines around the world, ssooo tonight I hooked up with a buddy of mine from 2/2 and we went on a cake run. It was awesome, only had to stop once for possible IED's which was great because its usually 2-4 times a trip. made it to all for AO's and got to get Marines their frikken Birthday cake. THIS is the best birthday I have ever had. Happy frikken birthday Marines, go get your piece of cake( and drink one for us) From me and my Marines in Camp Fallujah Iraq. 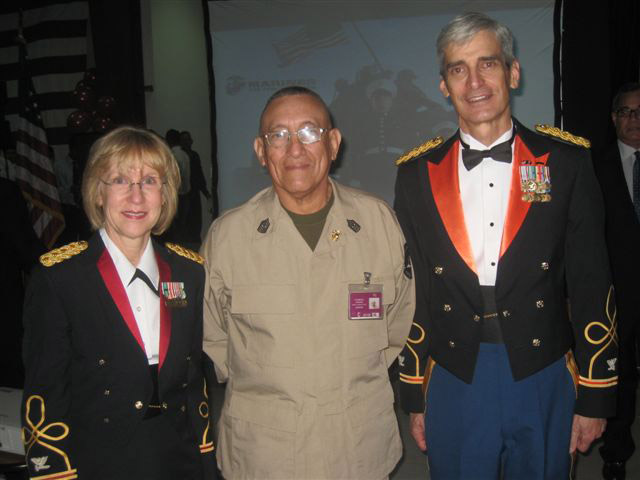 I attended Boot Camp at Marine Corps Recruit Depot in San Diego, California, and graduated in March of 1966. That March, I made the second ITR in Camp Pendleton, and I also followed in the mountains of Sierra Nevada the course of "Survival, Evasion, Resistance to Interrogation, and Escape". In July I graduated in the MCRD as "Drill Instructor". 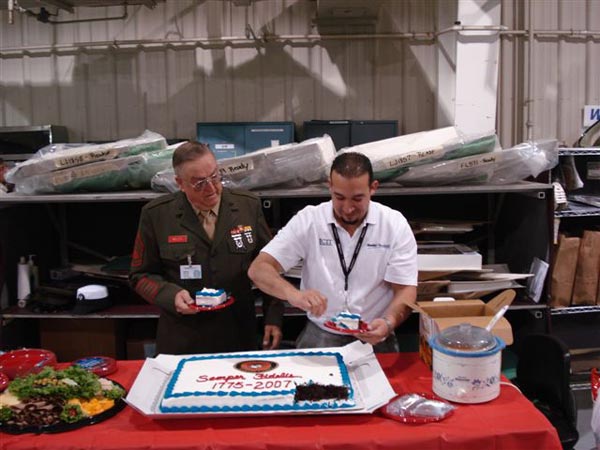 Friday November 09, 2007 a group of Marines, men and women, got together out in the Hawker-Beechcraft hangar in Wichita Kansas..

I read the Commandant?s message. And yes??time marches ON. This is the first time that I was the oldest Marine present. 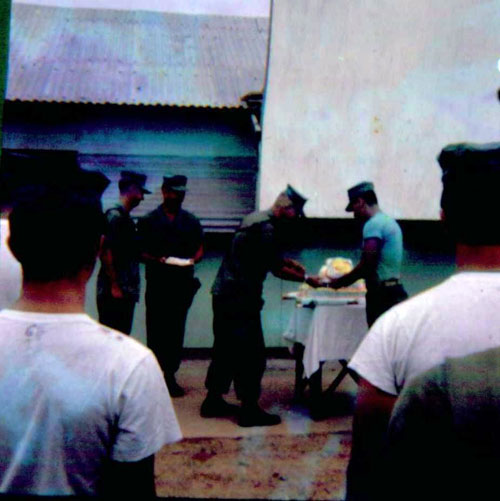 In Oct. 1966 I arrived on Hill 327 DaNang Viet Nam. When November 10 came around, it turned out I was the youngest Marine in our outfit. First Marine Air Wing, Hawk Missile Battery. Included is a picture of me receiving the second piece if cake. Now I go to Cookies Bar in South Philly every Nov 10 to salute the US Marine Corp. I especialy salute the 68 Marines I took home for their final journey while stationed at the Philly Navy Yard. 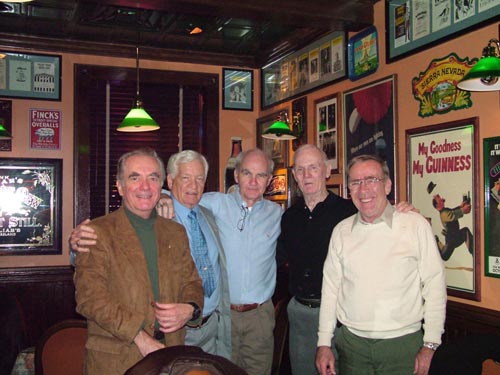 Some pictures give away raffled gifts, of course most of the gifts were purchased from Sgt. Grit, by my son Bill J. Also attached pictures of some of the group.

After our brake up most go to Cookie USMC Bar in South Philly for a Block Party with Marines and Corpsman's from all over. Of course the next day we attended Veterans Day ceremonies at Philadelphia's Washington Square, Beirut Bombing USMC Memorial, Korean and Vietnam War Memorials. 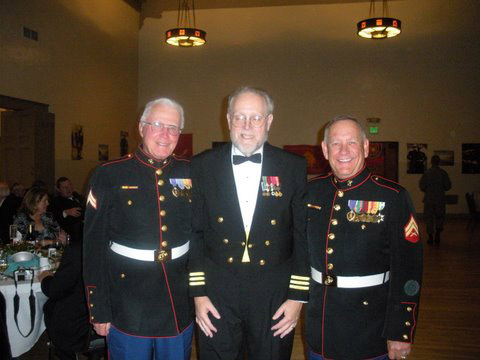 This is an historic picture of 2 Marines and a Corpsman who all served in 1/9 "The Walking Dead", from WW2 to Viet-Nam, recently taken at the 234th USMC Birthday Ball in San Luis Obispo, California, held by Marine Corps League Detachment 680. 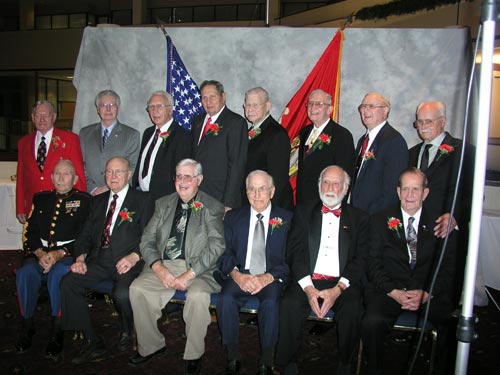 Each year we celebrate the birth of our Corps by attending a Marine Corps Birthday Ball. Since we live in a metropolitan area, and are not near a Marine Corps facility, we have the Ball on a Saturday as close to the 10th of November as possible. As you know the 10th doesn?t fall on a Saturday every year, but since it did this year we wanted to do something even more special. What better way than to honor those Marines that have become our legacy. It is those Marines that have come before us that have made our Corps what it is today. They are part of our history and their actions and deeds have set the standard by which all Marines are judged.