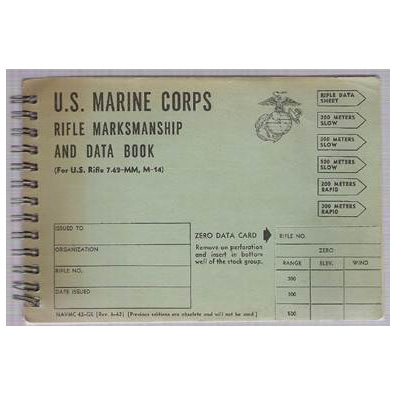 This should bring back a memory or two for you Vietnam-era Vets!   Larry Woolverton

I was wondering why I can not find any information related to the USMC scuba divers that were in C- company 3rd or 1st MP Battalion Viet Nam 1967 to 1970. We helped in guarding the bridges from China Beach to Da Nang. Attached are a few pictures of me and some of the other divers. Would love to hear from anyone who was part of the team. Thanks! 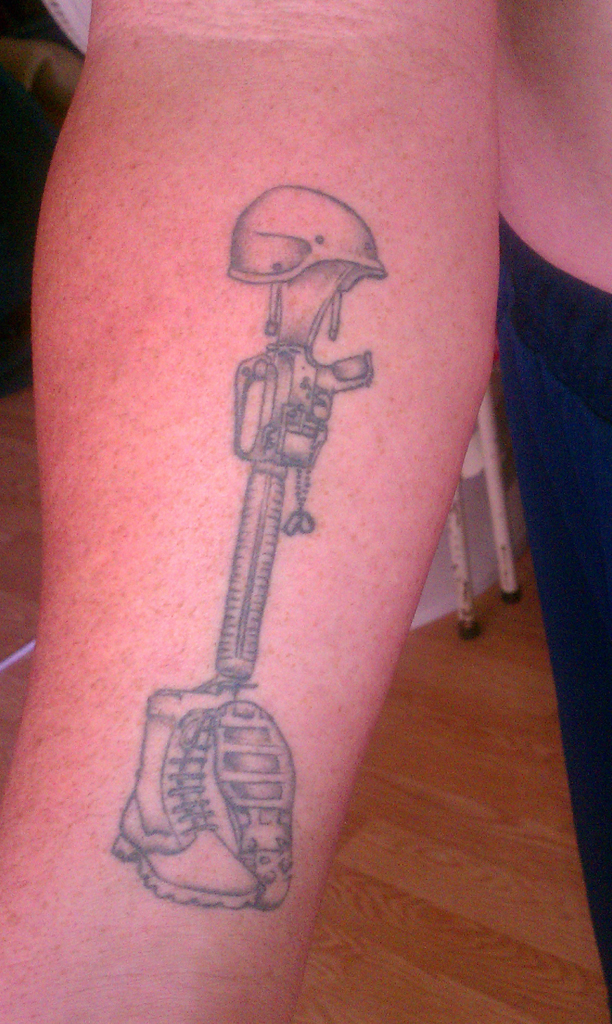 Saturday's newspaper dated 22 Sept 2012, myself (second with rifle, M1 Garand) with others from the Honor Guard. The forth is Terry Reams also a Marine, Marine Corps League, Mt St. Helens D889 and American Legion Post 175, Castle Rock, WA. This was at the VFW post, Toutle, WA. My 75 birthday was on Wed this week. 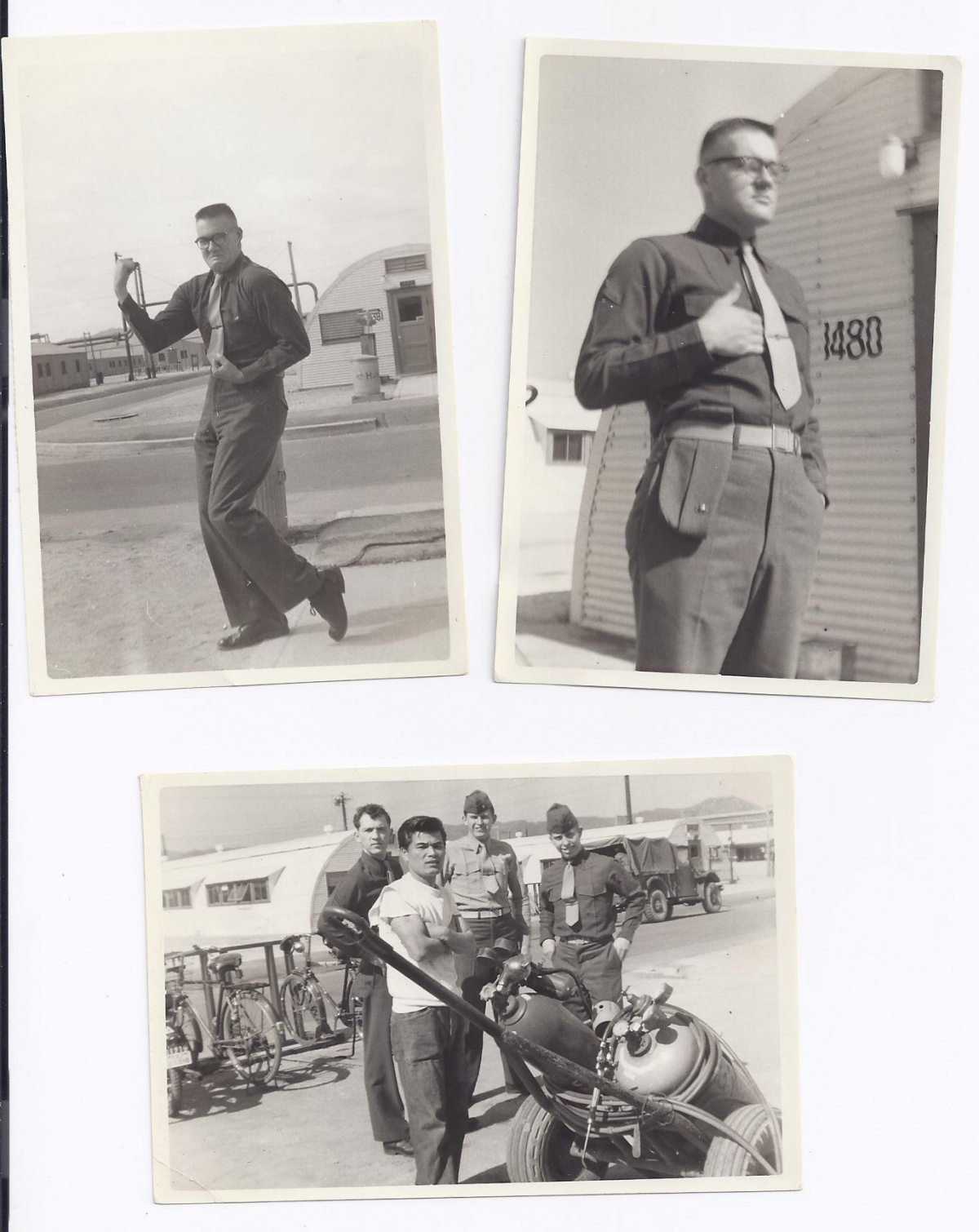 There have  been many comments about the Green Shirts in the last few newsletters. I thought you might like some pictures of same, taken at MCAS Iwakuni, Japan, either 1957 or 1958.   LCpl Phil Urquhart, 56-59 1615090

Submitted by John Ratomski
Photograph caption reads:
Peleliu was invaded on September 15, 1944. Pontoons were under the direction of Lieut.-Comdr. Littlejohn. Peleliu had been Jap-held for twenty years and it was the nearest strike, at the time, to the Philippines, some six hundred miles to the west. The reef was five hundred yards off-shore and entailed the longest causeway construction from ship to shore up to that time in the Pacific. The reef was in perfect Jap mortar range and they kept it well covered. Barges stood in close to refuel small craft and LVT's as the Marines kept driving further inland to stop the mortar fire. Surf delayed unloading operations as heavy seas broke over the causeways. A few days later, a new landing was made on the other side of the island. Tanks and guns came ashore and the Marines were fighting steadily on against the stubborn defender who was doomed.

I have had the privilege and honor of visiting many of our WW2 Marine battlefields over the years and this past January, I visited Peleliu for the second time. With almost a full week of exploration, I was able to traverse much of the battlefield and get a feel for the terrain that our Marines dealt with in 1944. While the jungle has taken over much of the battlefield, one can still readily see how impossible the terrain was……craggy, sharp coral dominates the battlefield, whether it be low-lying coral ridges or the Umobrogal Mountains. I can't imagine fighting there, especially considering that in September 1944, there was very little foliage and the temperatures hovered around 100 degrees. We explored Bloody Nose Ridge, Pope's Ridge, the Point, and the coral Badlands, just to name a few. Signs of a desperate, horrific fight were everywhere. A Japanese tank still sits on the airfield where it was taken out by the 5th Marines…LTV's can be found…….shrapnel and battlefield debris are everywhere. We climbed and crawled through Bloody Nose Ridge, stopping at each fighting position, marveling at how the 1st Division Marines conquered a dug in enemy. While Iwo Jima and Tarawa hold much of our attention in Marine Corps history, Peleliu is arguably the toughest battle our Marines fought in WW2, when you consider the ferocity of the enemy, the climate, and the terrain.

I have attached a picture from our Armed Forces/Memorial Day Parade. The Grand Marshall was Les Brown, a WWII Pacific Guadalcanal Combat vet. The Marine Corps Recruiters picked him up and drove him in the Parade in the new Hummer. PFC Brown is wearing his uniform from 1944. He is one of the few that could still fit in his uniform. The Marines from the Albany Detachment were impressed and the CO and Sgt. Major came to greet him.

Thanks so much for the little piece of real estate so many gave their lives securing. That little bag is pinned to the photo of the Rosenthal picture in my office. I now have a conflict. After reading the letters of some of the 399 other recipients, I feel unworthy of owning this little bit of sacred soil. I served from 84 to 97 and was in three hot spots during my career. None of which compares to the fight for Iwo Jima. I am the Commandant of the Lehigh Valley Det in Allentown, PA. I?ve gone through the roster of members and none served on IWO. So my dilemma is whom to do I present this artifact too? The letter that struck me was of the Marine who will spread some on the grave of his uncle. What a fitting tribute. I feel lucky to be one of the 400 and am grateful. I hope to find a deserving Marine in the future. Thanks again and Semper Fi!

I just wanted to show you what I did with the Iwo Jima sand I recieved. My husband won the sand from your contest, then gave it to me for my birthday, he's such a romantic *big smile*. So being a proud Marine and diehard scrapbooker I did this with the sand. Naturally the sand is in the container with a picture of the flag raising behind it.