The Everly brothers were in C battery 11th Marines. 16 area at Camp Pendelton. Quite the buzz when they showed up. Both were already PFC out of boot. Go figure. Anyway there were a few of their band members in with them. Never stayed at the barracks, went to Marty Valley Inn every nite.I was L/Cpl at the time an they were assigned to the Motor Pool with the rest of us drivers. OK guys. Their Mom and Dad showed up one day for a PR thing and oh boy was there ever a band on your typical Marine salty language. Plus every high ranking officer was around that day. Never a great thing. We all watched them on the Ed Sullivan Show and yes we gave them grief about that a Marines are, won't to do. They were doing a lot of PR stuff for the Corps so were not around all the time. But all and all good guys. And Marines. 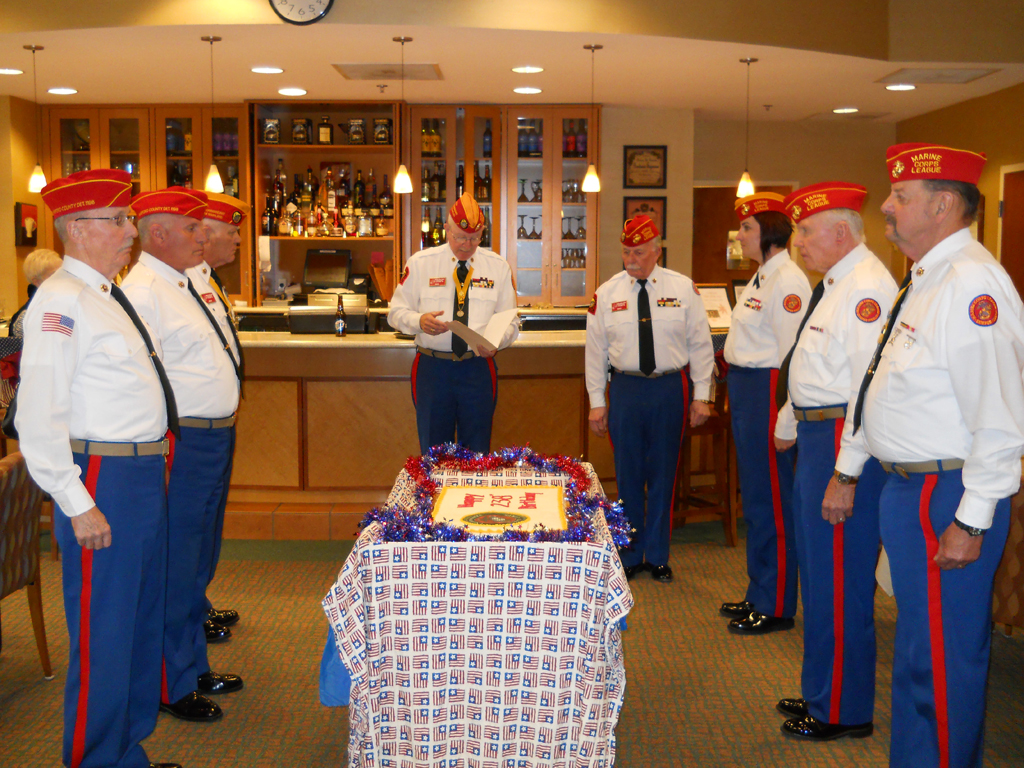 Marine Corps League Detachment 1198, Harford County Maryland celebrated the 238th Marine Corps Birthday with Marines living at Oakcrest Village in Parkville, MD. Richard Rhinehart is the oldest Marine at 105. Richard served as an aviator in Nicaragua during the Banana wars. He served with Major Smedley Butler. 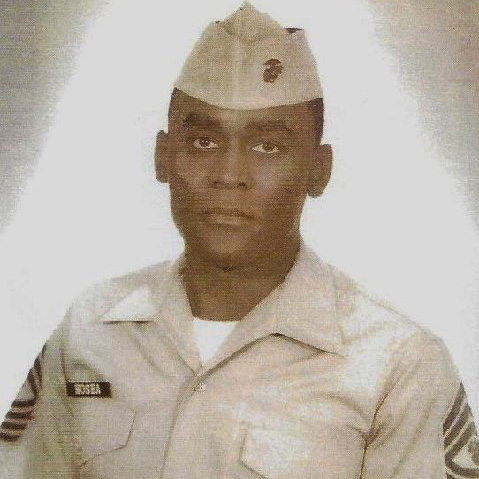 I had the distinct honor of attending the 'commitment' services for MGySgt Hosea on 11 October 2013 at the National Cemetery, Beaufort, SC. Although he passed away in Garden Grove, CA, back in June and had a full honors ceremony there he requested that he be moved to Beaufort where an infant daughter was interred in 1961. Nate, as a MSgt E-7, was my NCOIC in Base Electronics at Quantico in the late 50's when I was a Corporal (E-3). He was my 'boss', a mentor, an excellent example, and my friend. He died at age 85 and was a proud Montford Point Marine. He will surely be missed. 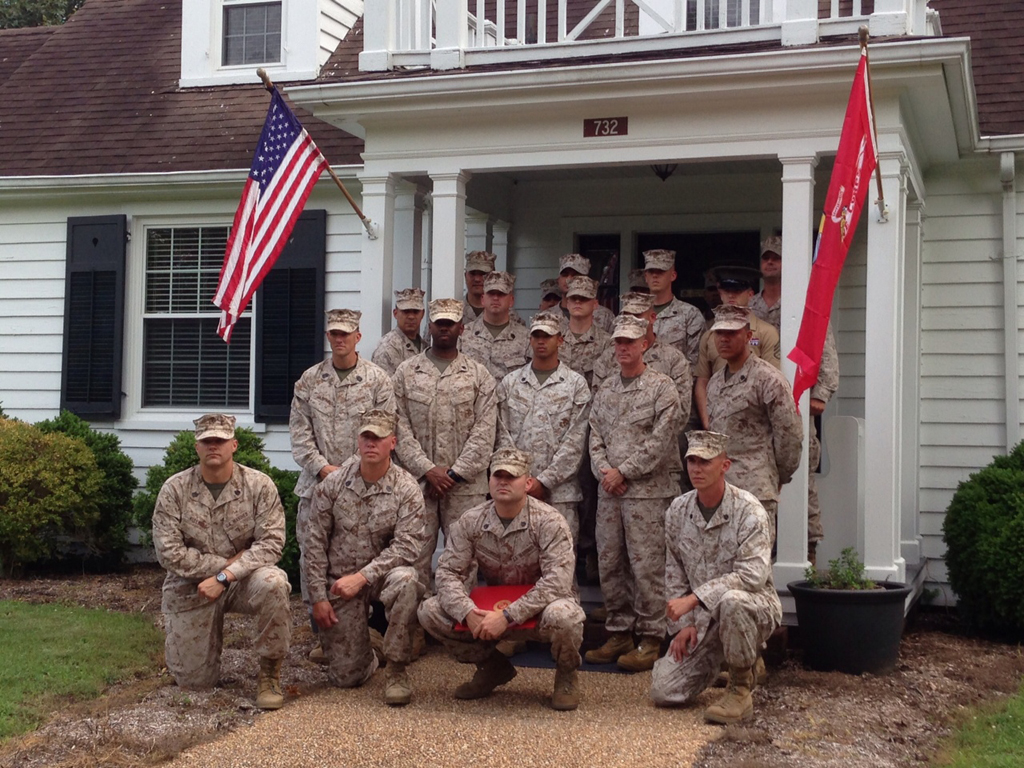 My brother-in-law owns the Chesty Puller house in Saluda, Virginia. Recently he sent me some photos of an award ceremony that took place there. I have no other information as to who these Marines were, or who was getting awarded what. It's a pretty good picture of the group in front of the entrance to the Puller house. 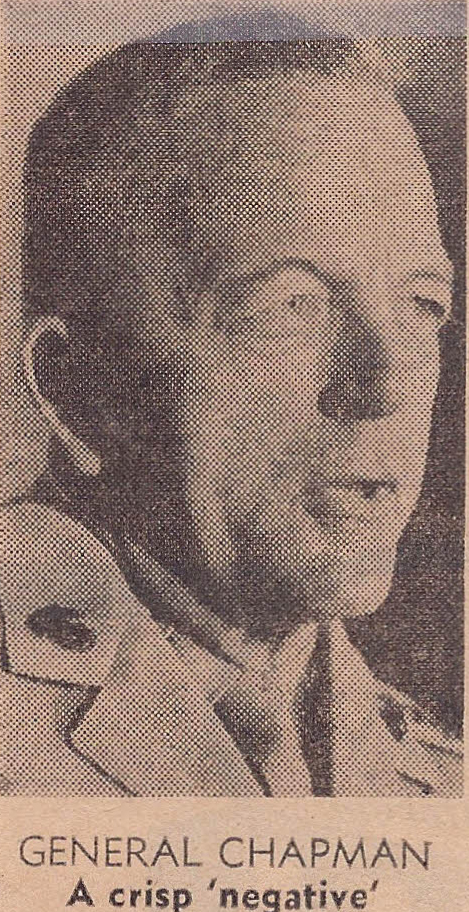 There will be no attempt whatsoever to make the Marine Corps a more congenial and comfortable organization to work for, its Commandant said yesterday. 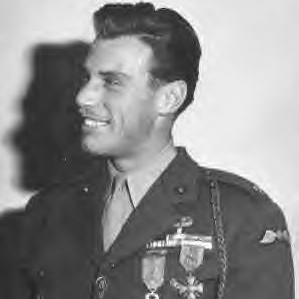 I finished reading Dakota Meyer's book; "Into the Fire", which explains how he earned the Medal of Honor. This is the story of a Man who was trying to save his "Brothers" during a terrible battle in Afghanistan. His Bravery was to try and aid his brothers who were caught in an ambush, he pushed his driver to keep going while he operated the machine gun in the turret. His actions show that he was trying to save his brothers by reading how he followed the tracers from his machine gun to get to the enemy gun, his concentration was to get there, not just the battle. Here is a Man who went into the Marine Corps because he wanted to, his Grandfather had been a Marine. 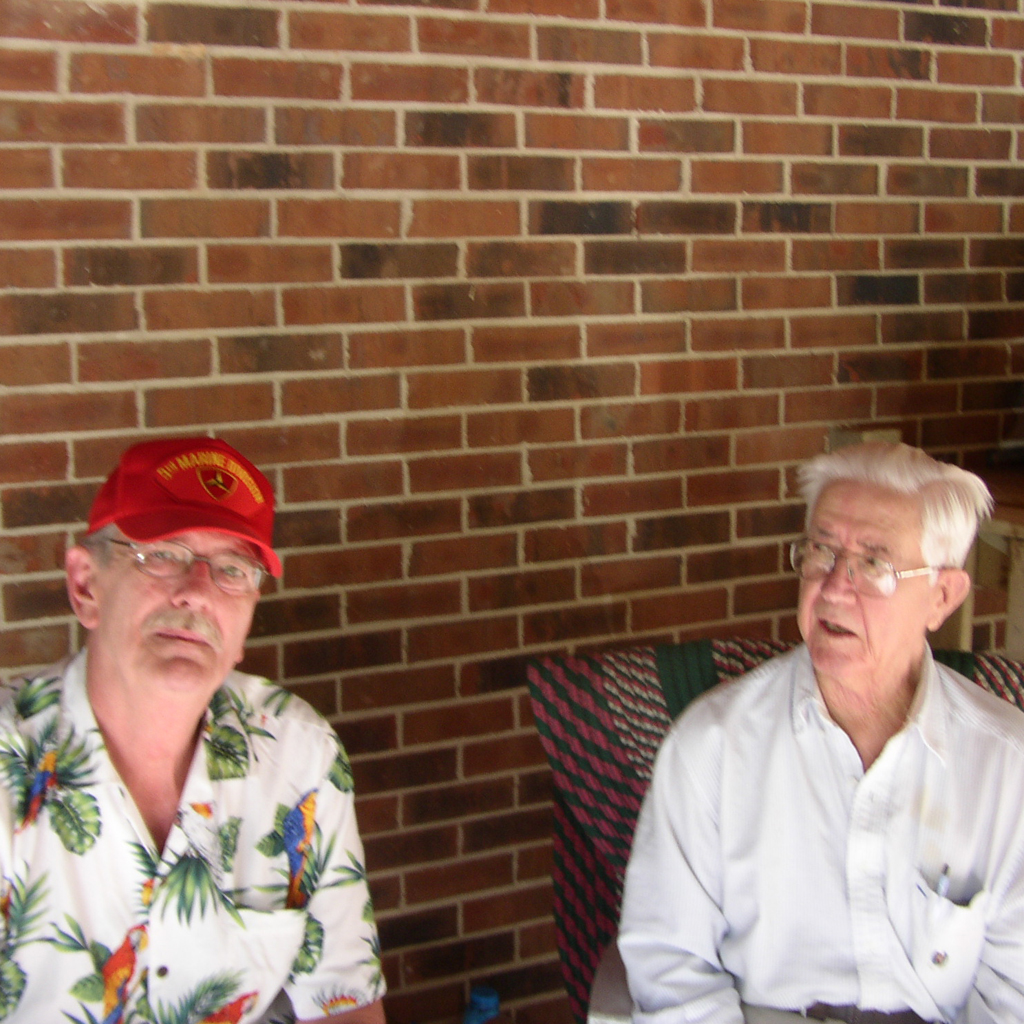 A while back, I posted a story about Lorton Berry. He had been in the Navy, 1940-46. Was attached to the 1st Mar Div, communications, in the Pacific. Served at Guadalcanal, Tinian and Peleliu, to name a few. Knew "Chesty". When I met him, he said he was missing some medals and one was purple. I contacted Rep. Marsha Blackburn in TN. Took a while, but her office was in contact with his daughter. And, a gentleman from Memphis Honor Flights contacted me, via Sgt. Grit. Thanks, Sgt. 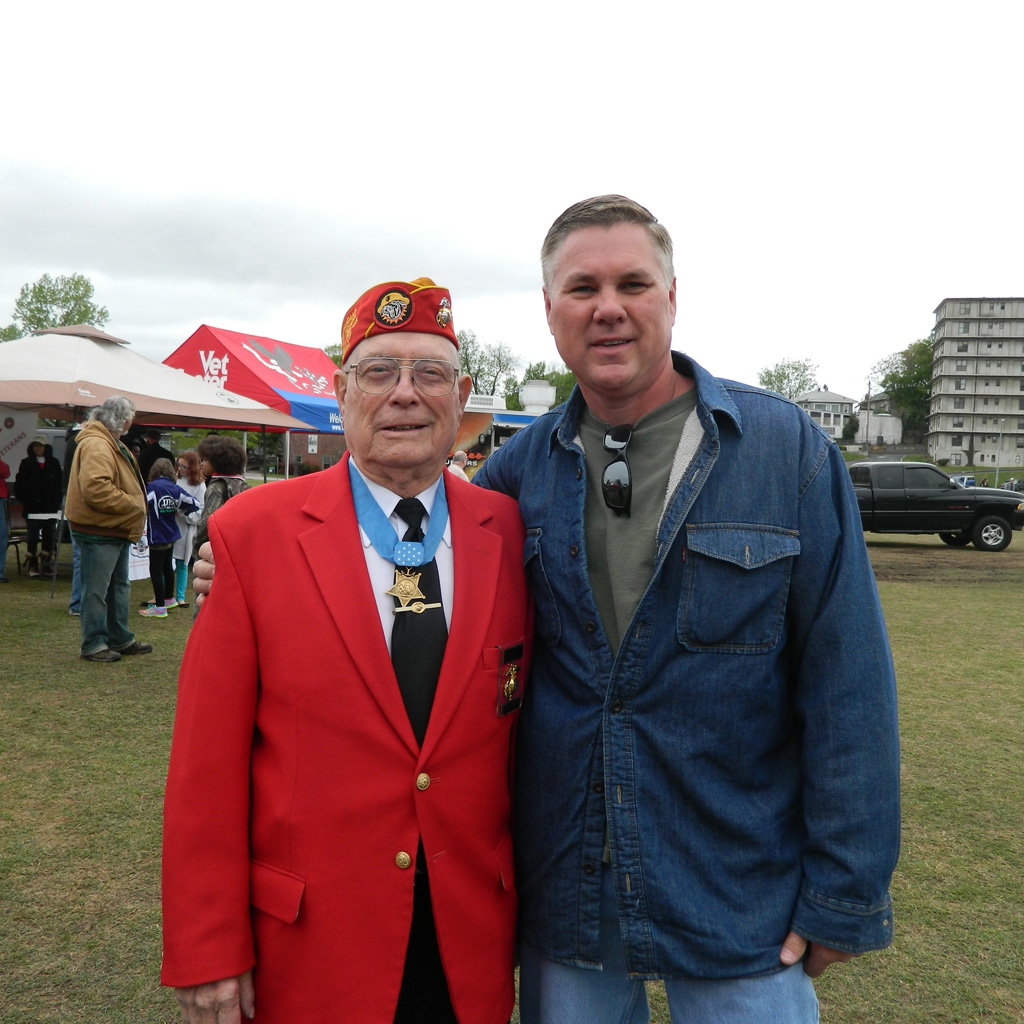 Here is a picture of myself and the last surviving Battle of Iwo Jima Medal of Honor recipient, Cpl. Hershel W. Williams. I had the great honor of meeting Mr. Williams at the Tulsa Medal of Honor Day ceremony, Saturday, April 27th 2013. He is 89 years young and still sharp as a tack. As I was standing next to him some guy had said he had spent 13 years in the Army. Mr. Williams said, "you know what the Army stands for?" "It means Ain't Ready for the Marines Yet!" We all chuckled and the Army guy even said he had never heard that one before. It was really a great day. 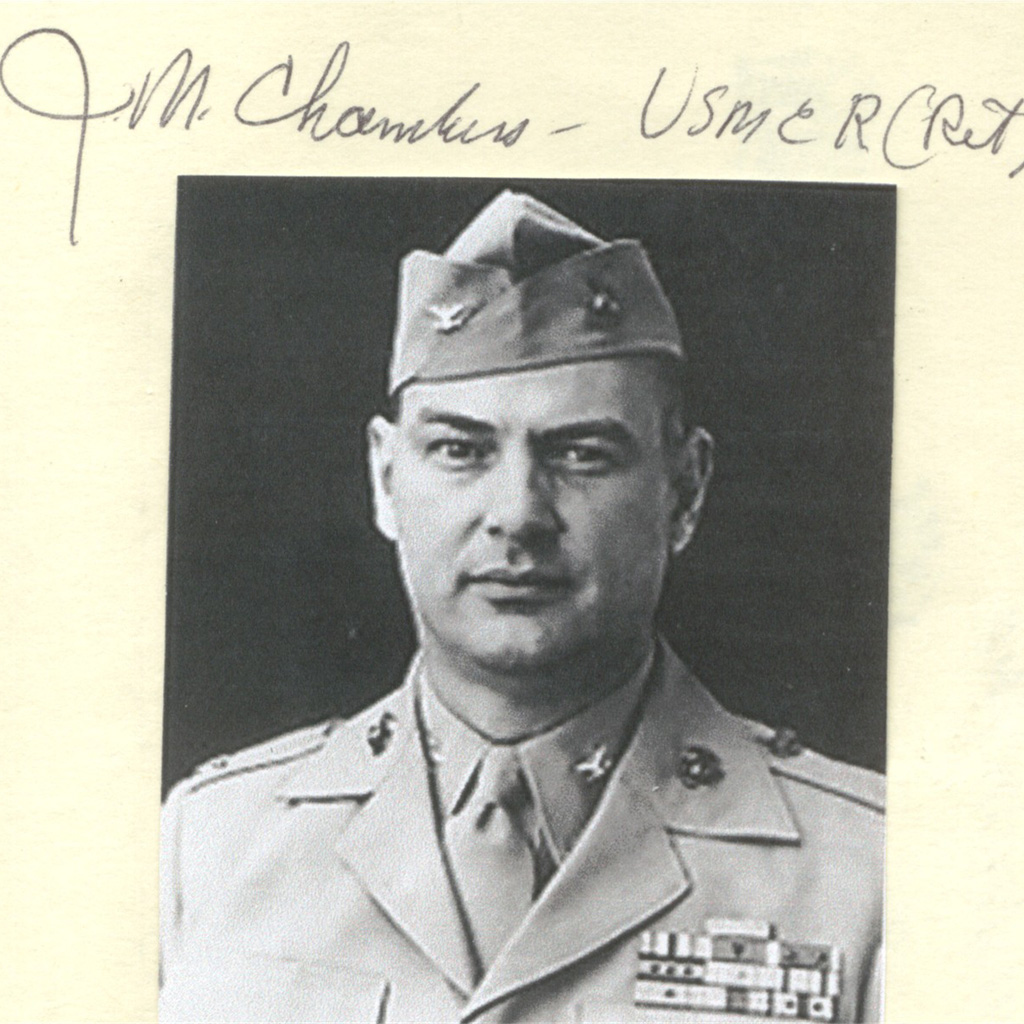 In early November of 1976, I was on a flight to Johannesburg, South Africa, by way of Rio on my way to countries farther to the North in Africa. It was supposed to have been a 747, but the passengers found themselves shoe-horned into a 707. At Rio, many of our passengers deplaned, so instead of every seat being filled, more than 1/3rd were empty. We took off on the long flight across the South Atlantic. I was on the aisle seat… a gentleman in his late 60s had the window seat. I suddenly realized that he was looking at me… more to the point, at the small Eagle, Globe, and anchor pin on the collar of my suit jacket. I was going to say something when I noticed his lapel pin. It was small, round, and had tiny white stars on a field of sky blue. I blurted out, "Excuse me sir, but is your lapel pin for the Medal of Honor?" 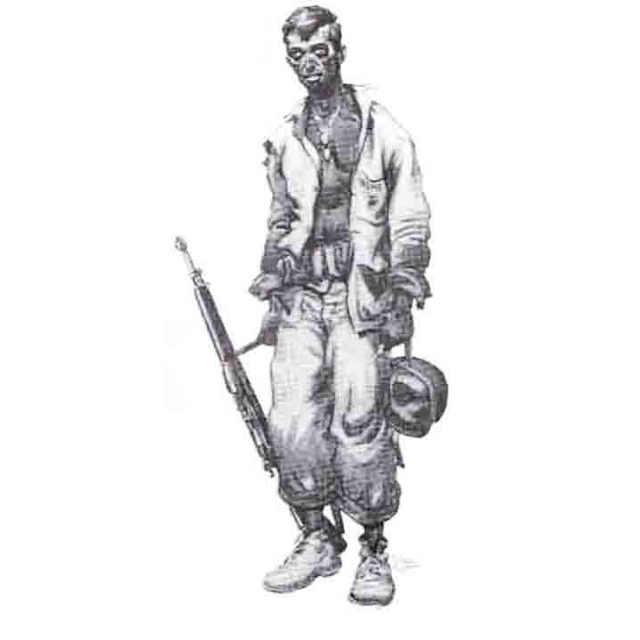 Sgt. Grit,   In my 86th Year,  I sometimes let my mind wander back to the days when I first met the Heroes of Guadalcanal, they were still heroes then. Every Marine admired those that went first, who were left on the island with not enough food or medical supplies. They were commanded by the best of the best, finally beating an enemy, though the Secretary of War and the Chiefs of Staff had all but written them off. Admiral Turner had withdrawn all his ships regardless of the fact that all supplies had not been off loaded. The Marines landed with less than a 30 day's supply though 90 days was suppose to be the norm. They fought with 1903 rifles and World War I ammunition. There were great Medal of Honor recipients that came out of that battle with names that are still  recognized, but many do not really know who or why. Mitchell, Basilone, Bailey, Bauer, Casamento, Edson, Foss. There were Marine heroes that the names are hardly recognized, like LtCol. Frank Goetige, Barney Ross, Charles Arndt, Frank Few and Joseph Spaulding.   Of course we all remember Chesty Puller whose Commander was Alexander Vandergrift who become the Commandant of the Marine Corps and is maybe one of the reasons the Marine Corps was saved by his, "On bended Knee" speech to Congress.   I remember old Marines talking about Chesty Puller, about him diving in a bomb shelter when a shell landed nearby and nearly burying him, and his cussing when he pulled himself out about how any Marine that violated fire discipline on the Canal, would be put in the listening post which was outside the wire.   Marines write in about Marines they met that fought at Iwo Jima, but none about the first that fought at Guadalcanal. I have a small box that was given to me by a friend who returned to Guadalcanal and scooped a small box of sand from the beach. It is my box of Sacred Soil. I also have a box of sand from Iwo Jima that is sacred too. One of the greatest times in my life was when I went to the 200th Birthday Celebration at the Queen Mary in Long Beach. There on the stage was at least 10 Medal of Honor recipients. The thrill was because each was wearing his Medal. I served under eight Commandants of the Marine Corps, I think that Gen. Thomas Holcomb and Gen. Alex Vandergrift were by far the greatest of them all. I knew PX Kelly when he was a Captain. I fixed the pistol he was going to shoot in the Marine Corps matches. I recently saw a drawing by a Marine Illustrator of a Marine coming out of Fallujah. It reminded me so much of the drawing of a Marine coming  out of Guadalcanal entitled "Too Many, Too Close, Too Long" drawn by Donald L. Dickson. Here's copies of both pictures.   GySgt. F. L. Rousseau,  USMC Retired