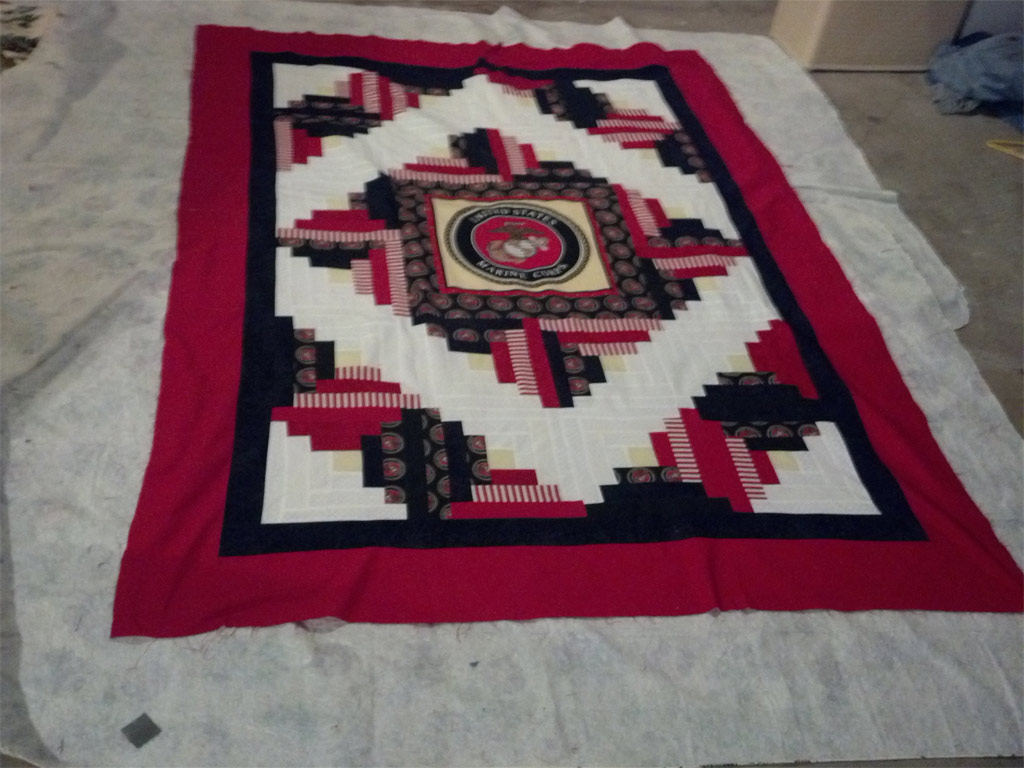 I've been a Marine Mom since 2002 when my one and only son left for boot at PI. Was always patriotic, but have become more so since that time. I joined Quilts of Valor a while back, when my Dad, a Korean War vet, passed after a quick, ugly meeting with leukemia.  I have always "made" things, but could never quite master the quilt arena. NOT that I have mastered it yet, but Daddy passed something on to me that won't let me stop with these quilts for the veterans in our lives. Just wanted to share one with you that is near and dear, finished it on the anniversary of the USMC and posted it on their site once.  Hope you enjoy. It will be going to one of six Korean War Veterans this month (I promised them a quilt!). It may not be the best, but it has my heart in there. And I have added a picture of my Marine.  Thanks for all that you do, at Sgt. Grit – everyone wants to know where I get my great t-shirts. 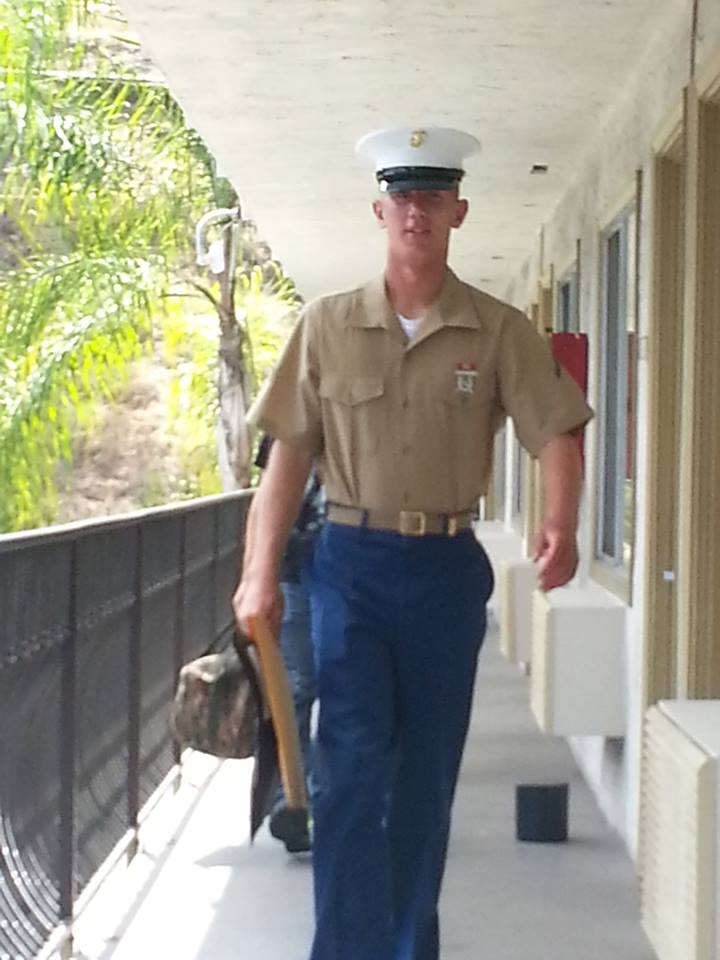 My son just graduated from Marine boot camp at MCRD San Diego on September 6th. Not only did I travel from Missouri, 1643 miles to MCRD San Diego, to see him graduate 8 others went also. 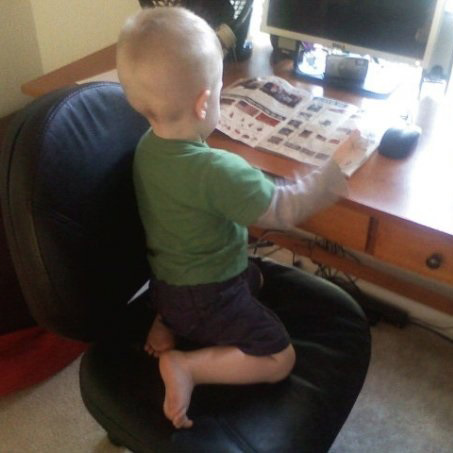 My dad, brother, and husband all served in the Marine Corps. My oldest son plans on joining, and by the looks of this so does our 18-month old son Lex. Here he is at our computer desk with the Sgt. Grit catalog deciding what he wants us to buy! Everyone in our family loves your catalog!

When my son left for Boot Camp, I was a lunatic. Our family had no military experience and this was my oldest son. Being the computer dummy, that I am, I naturally took to the Internet for information about how I could help or support my son. The first thing I found said "send letters, lots of letters". Well, my son joined in June, but didn't leave for Boot Camp until October, so I started writing, every day, in June. When I finally got his mailing address, I took off to the post office with 105 letters. His first mail call was more like an avalanche of insanity that was not appreciated by his Sgt. The next thing I learned was a list of all the things Poolies needed at Boot Camp, like band aids, gel foot inserts, foot powder, socks, mole skin (didn't even know what that was).  So, off I go to Walmart, then directly to the post office. After I got back home, I read the part that says NEVER SEND ANYTHING UNTIL YOUR POOLEES ASKS FOR IT AND HAS GOTTEN PERMISSION TO RECEIVE IT. Oops!  When he received this package his Sgt asked why he had gotten all this stuff and my brilliant soon to be Marine said "I guess because this Poolees Mom thinks his feet hurt, Sir."  That really cost him. Now 8 years later and after several deployments, that Marine, is a Sgt himself and getting ready to come home for good. He will be coming home to us a proud, confident and much stronger man than the boy that left all those years ago. 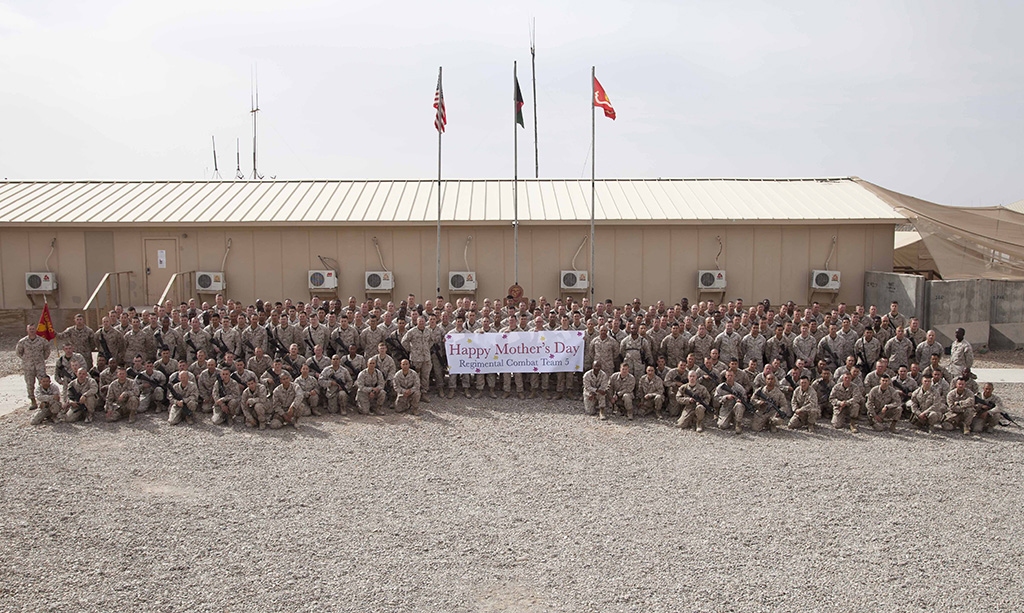 So.. As a Military parent, you have alot of questions, you want alot of answers. You want to know whats going to happen to your daughter or son. The UNKNOWN can be a very dangerous thing or it can be one of the most miraculous. But when you hear the voice of your child telling you that he or she is ok.. just for 30 seconds, you will be given a sense of peace that you have never felt before.The different emotions.. The excitement of that first letter, the hope of knowing to see them again, the HONOR to hold as a parent, can all be very wonderful. I hope and pray that you will feel all the amazing emotions of watching your child become a Marine.. 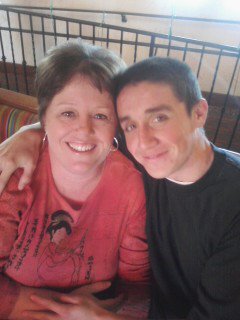 My oldest son who is now 24 has been in the MARINE Corp for six years now. Last night I signed papers for my 17 year old to begin the process of becoming a MARINE. His Staff SGT picked him up at 4:00 this morning for his physical. I could not be more PROUD. You can already see the PRIDE in his face. From the bottom of my heart THANK YOU to all the MARINES out there. Thank you for always having my sons backs. I will always have yours. You are all in my prayers. Luv ya lots. 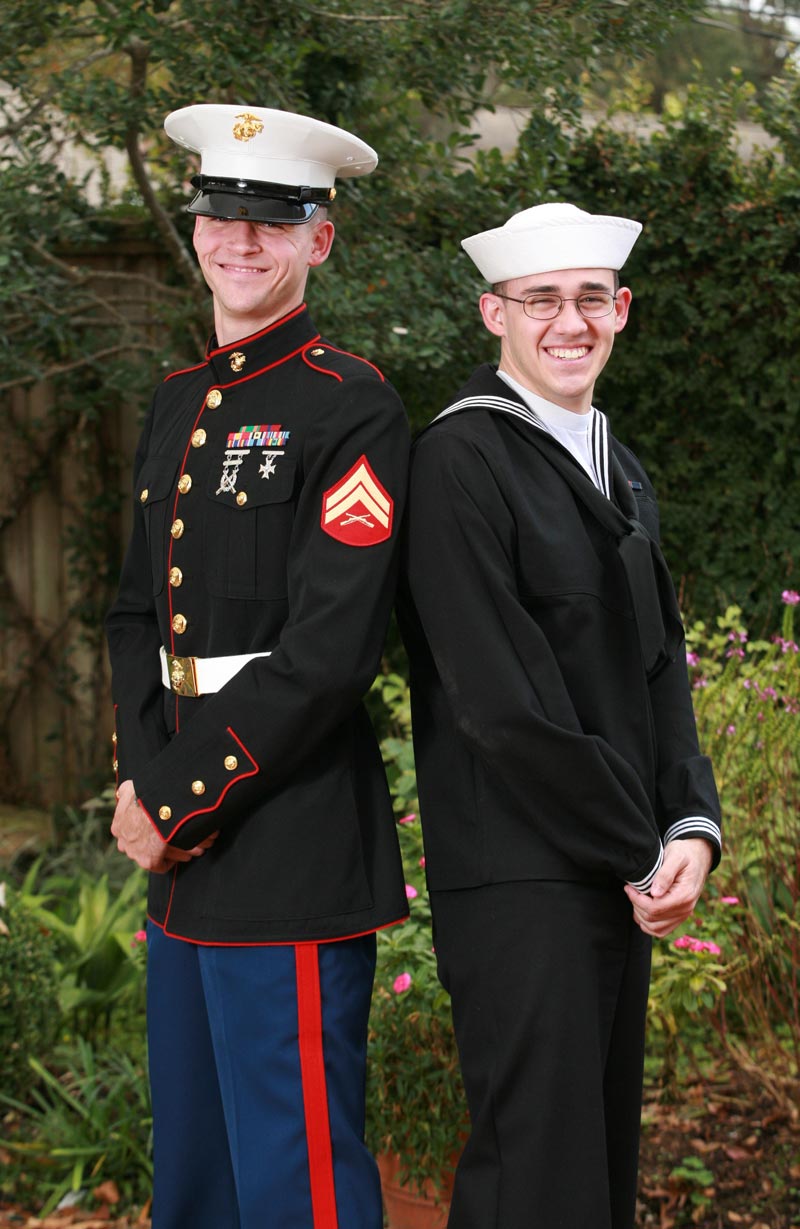 I have never written in but have enjoyed reading all the stories and comments submitted.   -I am not a Marine, but I am the mother of one.     -I say at least we know what 'FI" means.  My son has only been out for 8 months but still talks in acronyms, the ultimate form of abbreviation.  I don't know half of what he is saying and have to remind him that I was not in the Marines.   -His brother is now in the Navy and it is a whole "nother" language.   LORD help me! Carole Handley   PMM Cpl Matthew PNM MM3 Reed Eagle Scouts, both! 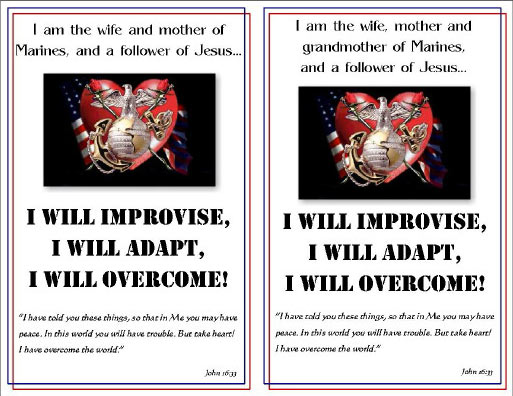 Dear Sgt Grit,   My husband served in the United States Marine Corps prior to our meeting and marrying.  In January of 2009 our son graduated at MCRD San Diego.  When April rolled around he and his new bride moved from our home in Washington State to Camp Pendleton.  With them both being only just 18 it was hard to say goodbye!      In August of 2009 my husband’s stepfather began serving at Heaven’s Gates.  We had one more Christmas with our son and his wife that year then it was 11 months before we were able to see them again.  My heart ached for my son’s presence; my wonderful mother-in-love was dealing with the loss of her spouse.     On day I gathered my pitiful little heart up and screwed up my backbone and said to myself “I am the wife and mother of Marines!  I will improvise, I will adapt, I will overcome!”  Later I spoke to my husband’s sweet mom and she was down in the dumps.  Not the kind to be coddled or fussed over, I reminded her that she could do this.   I decided to make a half-sheet moto placard for myself and make the other half for her.  Since she lives several states away, I mailed hers.  She called me right after she got it, sobbing.  She said she’d had to pull over on the way home from the post office and have a good cry, but that this placard was THE best thing because she needed to hear it.  That’s the kind of woman she is and during her grief she’d forgotten it.     My copy is on the wall next to my computer where I spend a lot of time.  When I miss him and feel low I remember that I married a Marine and I raised one and that I have the ability, with God’s help, to improvise, to adapt and to overcome—it is my choice.   Please find the placard attached, perhaps you can crop it appropriately and publish it—there may be another wife/mother/grandmother that might need to make herself one!   All the best!   Harriet Cook    Very Proud Wife and Mother of United States Marines! 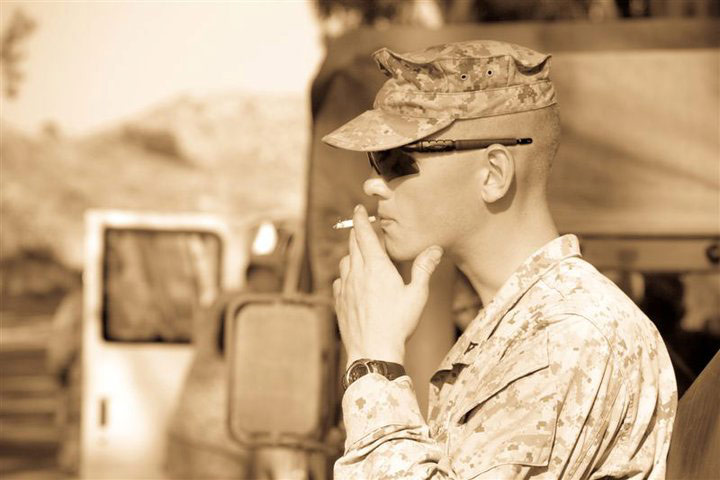 Two pictures of my baby boy (deployed in the sandbox right now)   First one is self explanatory….My bad-ass Marine   Second one is him with his nieces – he had just come from a honors funeral (did quite a few of those before he left)   SOOOOOOOO proud!!   Cindy M O M