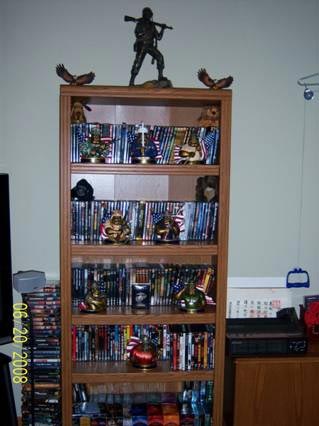 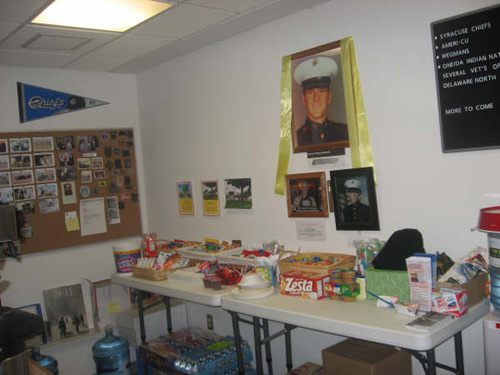 We thought you all might enjoy the attached photos. As some of you know, a local Marine Corps League Detachment decided that the troops traveling in and out of Syracuse needed some space and a comfortable setting during some long lay overs, often even over night. There is a large Army base, Ft. Drum, just an hour north of here, whose soldiers use Syracuse Airport as their primary source for commercial air travel. So, the Commandant of the Emerald City MCL Detachment, Loren Davies together with hsi friend and Army Veteran Leroy Bowen, coordinated with the airport and the City and were given space at the airport and a $1 a year lease for the space for 5 years. 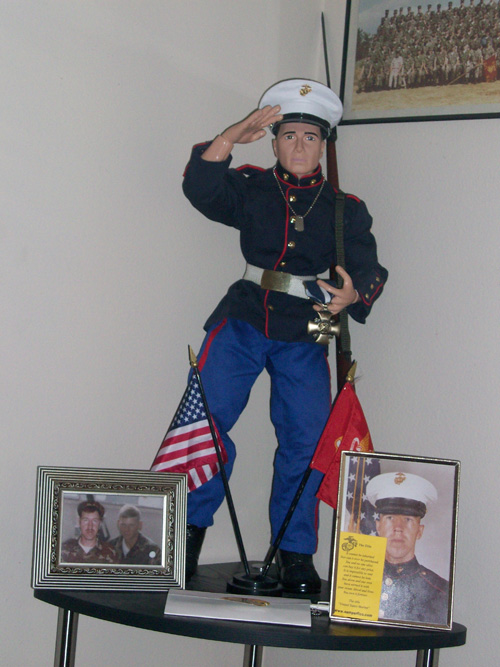 It took a while for me to get it together and put it out in the open, but as I started out with a little I was surprised as to how it kelp on growing not knowing when to stop until it takes up the room, and than the house.

Of course I have to share my room with my Uncle Bill: Koroa Marine Vet. 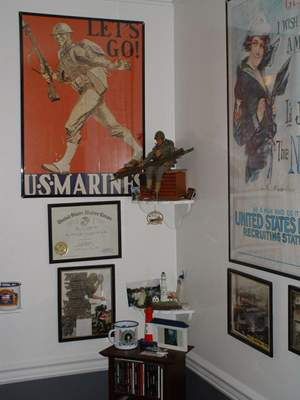 Photo of the corner of Doc Huelbig's Room 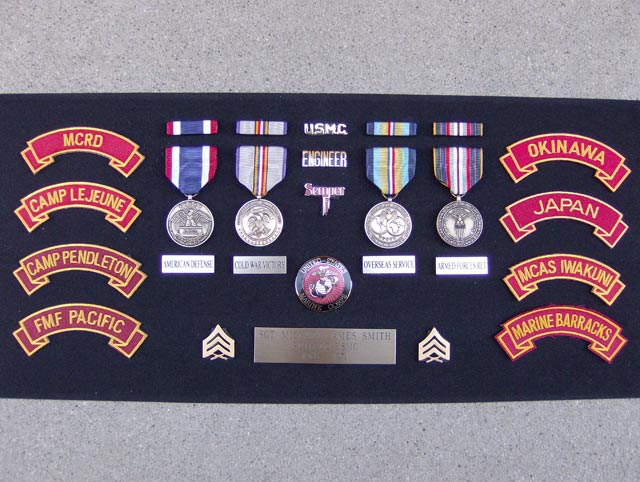 I recently went through a box that had been packed up for over forty years. I rediscovered my medals, ribbons, certificates and awards that I had received while serving my country in the Marine Corps ( Feb. 1965 to Jan. 1971 ) After some consideration, I decided to display them and my pride of service. I also thought I would surprise my Father and Brother with a display of their service. My Father, now 84 Yrs. old, served during WWll in the Pacific( USMC 1942 to 1945 ) He was at Guadalcanal, Tarawa, Saipan and Okinawa some of the most fierce battles the Marine Corps has ever had. My brother was in the Army ( 1969 to 1972 ) Both of them were overwhelmed when I presented them with their displays cases. The pride in their face was worth a million dollars. I often find my Father gazing at the display on the wall. Thank you for all your help and of course for the availability of all the products I purchased from you. ( See Attachments 1, 2, 3 & 4 ) 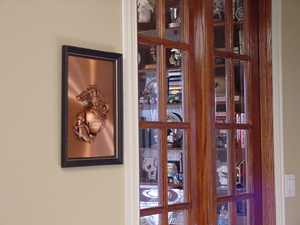 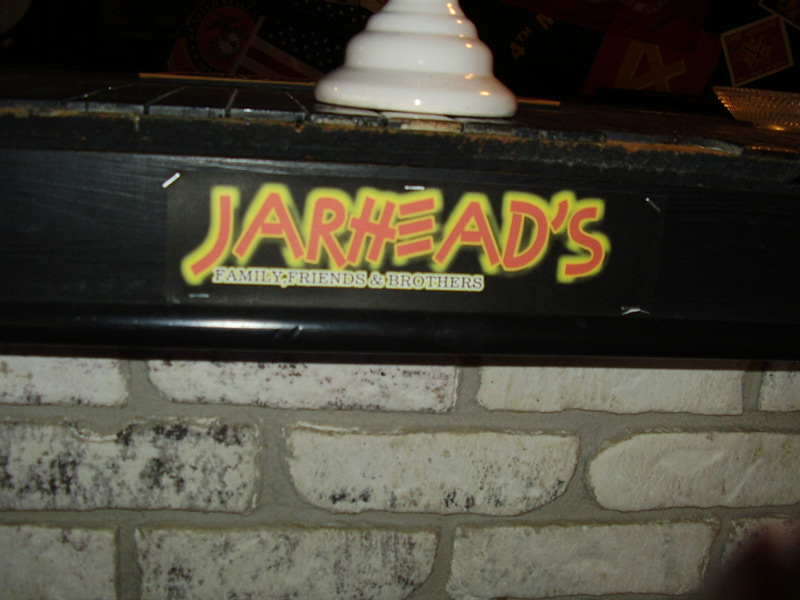 This is my bar. There are many like it but this one is mine!

This is Jarheads bar. Dedicated and decorated in USMC. Thank you for contributing to my delinquency Sgt. Grit. Located in my basement in Illinois, it is for family, friends and brothers. 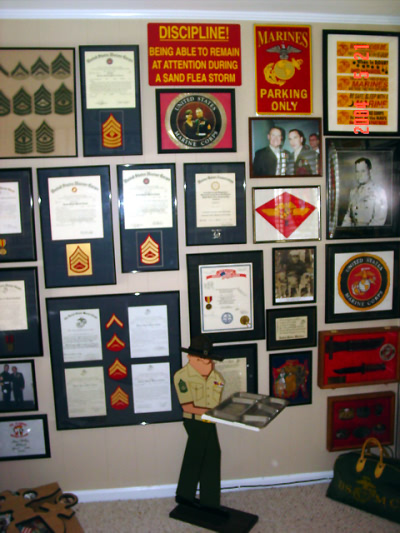 Dear Sgt. Grit, I would like to share some pictures of my Motivation Room (I love Me Room) with you and our fellow Marines, after 23 years in the Marine Corps I still like to plaster the walls with USMC. Thanks to you and your business. 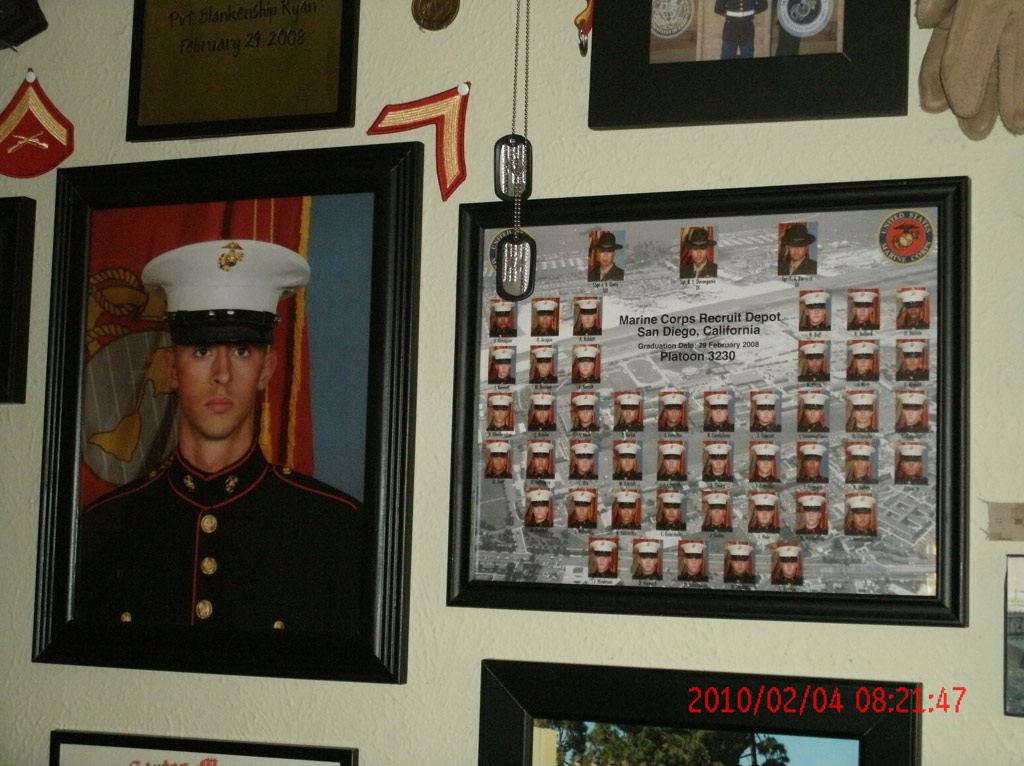 Hello! My name is Debbie Blankenship. The pictures that I have attached all started with "our marine". My son, Lcpl. Ryan Blankenship, joined the Marines in December 2007. He was deployed to Afghanistan in December 2009 and will be returning home in July. When he made his decision to join and put his life on the line for the sake of our country's freedom, we as a family stood behind him. And so began our family's "Military Wall of Recognition". The wall began with our son but has grown to include not only Marines, but any/every branch of the U.S. Military. That wall is the very first thing that you see when you come into our home. We want to make sure that it is clearly understood that we support our U.S. Military and stand behind them no matter what. We would like to thank Sgt. Grit for allowing us to show our support with your merchandise. My family would also like to thank each and every member of our U.S. Military for their service. 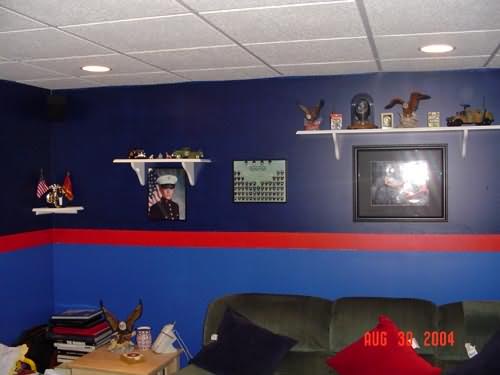 here are some quick pics of my basement in dress blue fashion the pictures don’t do it justice.
Z. Perez