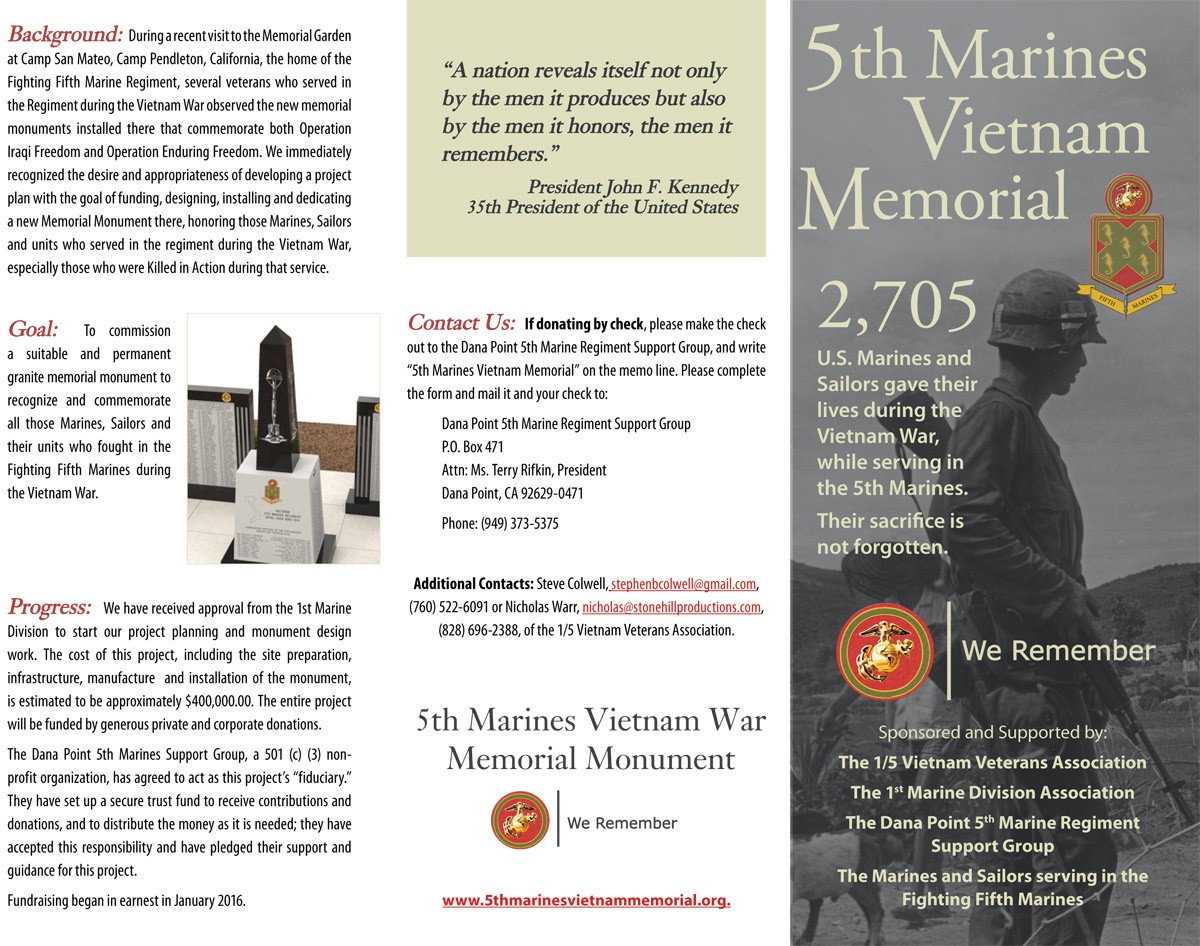 2,706 U.S. Marines and Sailors were killed in action during the Vietnam War while serving in the Fighting Fifth Marine Regiment. Their sacrifice is not forgotten. With your help, each and every one of them will be honored with a beautiful new Memorial Monument at the 5th Marines’ Memorial Garden, Camp San Mateo, Camp Pendleton, California. END_OF_DOCUMENT_TOKEN_TO_BE_REPLACED

This Nation's oldest Marine, Al "Sarge" DeSerio, veteran of World War II, Korea, and the Viet Nam War, has passed to his final rest. Sgt. DeSerio served as an escort for WW II KIAs and served TWO tours in Viet Nam. He received eight (8) stars for Good Conduct. He "retired" in 1970 after 42 years of service in the Corps. He passed away at age 105 years, five months at a retirement facility outside Philadelphia, PA……AND NO ONE NOTICED !!!!     Cpl. JAD / 1969

Here is a poem that I wrote one night after having been contacted by some of my old OCS and TBS classmates (42nd OCC & TBS 4-67) who were planning our first reunion to clebrate the 40 year anniversary of our graduation. I read the poem at a memorial service at the Wall when we held our reunion at DC and Quantico in 2007 and have recited it at our subsequent reunions since then. 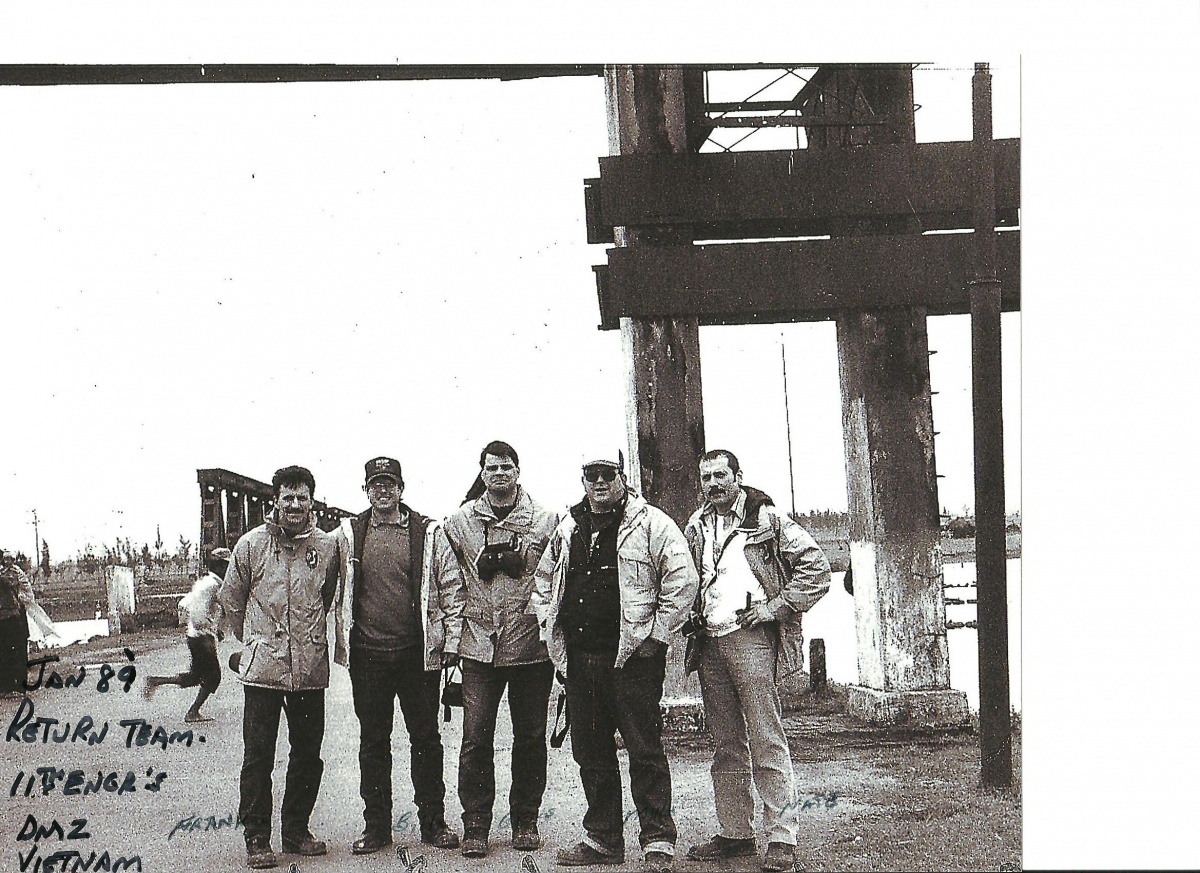 Even today, our return trip continues to help those who are still uncertian about the past–and Vietnam.

The Viet veterans believe the war is over.

It's time for some to move on.

Semper Fi to all who served and for those who didn't come home.

I got to Paris Island the same weekend as Woodstock. I don't remember the date, but as it happens it was late at night. Anyone who was lucky enough to get to Paris Island knows the rest of the story. However, this is about then Sgt. Tandy Wells. He was a junior Drill Instructor Platoon 1038. I was 20 years old when I went there in 1969 and I bet the then Sgt. Wells was about the same age. He was pretty short for a Marine I thought, about 5'-6" at the most, young enough looking to be perceived as baby-faced, I was 5-3 or so, shortest recruit in the platoon. A size  6 1/2 or 7 set of boots was not to be had for me at the time, and as it turned out, never. So I did everything with what was available. Well, we know what large ill-fitting boots can do to a pair of feet! It was hard to do anything with bad feet and of course that gets the wrong type of attention from the Drills. When I explained to Sgt. Wells what the problem was, he gave me even more hell for not letting them know. Then he went to the Drill Instructors office and came out with a set of the  shiniest  boots I had ever seen. He told me to see if they fit, they did, and fit great. He said,"they're yours", and that may have been followed by some derogetory expletives as only a Marine Drill Instructor could spout  out.   His next words were  "I expect you to be the best G_ _ D_ _ _ recruit here now. Those are my best boots". I took home the "Blues". Of course I was grateful but didn't have a full grasp of what I was experiencing. I didn't need any special treatment, tutoring or favor to earn the honor of being the best recruit in my platoon, I simply needed the right "tools" of the trade. Sgt Wells made sure I had the right "tools" and the right training to become a Marine. I am certain I am not the only "lower than plant life scum " that he went that extra step for. I know some will enjoy this and some not, but I hope his family gets to see it, every word true to fact. Whenever I think of "Courage, Honor and Commitment" I think of Tandy Wells. Thanks again, Semper Fi

We, Marines, simmer. We wait. For the fight. Lick our chops and jump at the sight and smell of blood. Caked on a sandy floor or glazed on a jungle vine.

Swearing, sweat drips in our eyes and stings. We let it fall because we enjoy the pain of the fight.

I am a United States of America shredded flag.
I fly from the roof of many typical American homes.
Some time ago, I was new and radiant when they placed me there,
But the wind and rain have reduced me to strings of red, white, and blue.
Sometimes I fly from vehicles until I am torn to shreds;
Though I still wave proudly, and can be recognized, I need replaced,
And here is why:

There once was a young man, dark and tan,

That grew up and lived in this United States land.

He had a dream, indeed a dream,

To be a United States Marine.

He grew up fast and grew up clean,