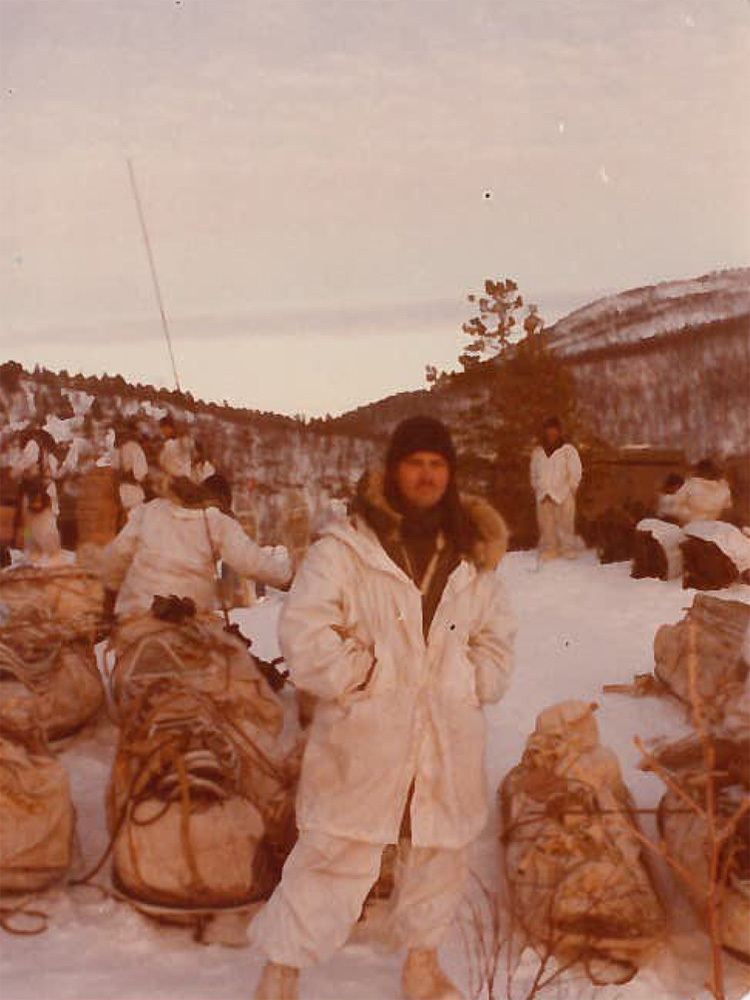 Here are a few pictures from the Med float we did in the 1984. We (Lima 3/8) did a joint operation with the Norwegian Home Guard before we landed back in Beirut to relieve 2/8. It was a cold-weather operation so to prepare us for the operation we went up to Camp Ripley Minnesota. And let me tell you it was cold as a witch’s… well, I’ll leave that to the imagination of the readers. Anyway, most of us b-tched and complained (as usual) thinking that there was no way the cold of Minnesota could ever prepare us for the cold of Norway. Well, as usual again we were stupid aszes for thinking that someone above our dumb aszes did not know a thing or two about proper training and had been through one or two rodeos before. Norway’s cold and snow was NOTHING compared to Camp Ripley and Minnesota! We were well prepared to say the least.

The ten-man tents we stayed in took a little teamwork to get them set up properly, but the oil-fired Yukon stoves and the body heat kept us warm at night. The weapons were kept outside to avoid taking them from the cold to the heat and back again and allow for condensation to form rust on the metal parts. Then too it provided for more room to move around the tents without having to move around weapons, particularly the M60 machine gun, tripod and spare barrel bag and all the rounds. The three worst spots in the tent were the two spots next to the hatch flaps and then the spot directly across from the hatch flap if someone got out during the night to make a head call or switch up the fire-watch. Of course the many farts in there were horrendous even though we were in our sleeping bags, but that was to be expected. The spot next to the stove could be good or bad depending on how hot that stove got. For me the worst part was sweating while we were humping during the day and then having to strip down to the buff in the cold to change into dry clothes.

Due to the extreme cold, Junior would hide during a standing head-call and finding him could be problematic through all those layers, and many a good Jarhead p-ssed on the white, winter camo layers, but hey, you do what you gotta do. Also, I did not think the Mickey Mouse boots were warm at all. Towing all of our gear in the sleds was neat at times, but required that we all work together to keep that sled moving straight and not veering off the path. If someone was slacking, you could easily tell and the others had to compensate. Gung Ho, Gung Ho! Humping with those snow-shoes was a royal b-tch and was in and of itself a h-ll of a workout, but as I recall we did not have to use them too often. Attached are a few pictures and one is of a view of one of the fiords. Being a history buff, I stood there in amazement knowing that the German battleship Bismarck and the Heavy Cruiser Prinz Eugen could have pulled up in those very fiords to hide. Semper Fi!