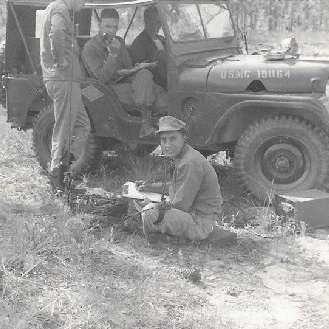 Today, this 79 year old Marine was reminiscing about the old days and wondering what type of communication equipment the Marine Corps uses now days, its got to be high tech. In the mid-fifties we used field radio equipment like the AN/PRC-8, 9’s and 10’s and the AN/GRC-9 which used a hand cranked generator for power to transmit. Cranking that thing was fun, not. We even had the AN/PRC-6 (walkie-talkie) in our inventory but don’t remember using it. For mobile comm we had the MRC-6, the MRC-38 and other vehicles depending if you ere infantry, artillery or armor. For the old timers I stand to be corrected.

As a CW radio operator I remember using what was called a knee key (J-45), to tap out messages in Morse code while in the field. To me it was fun but sometimes on the other end of the radio net you would run into a operator who we called a “s–t fist” (A person who needed a lot more training in the use of a telegraph key).


It was a little difficult trying to decipher what the radio operator was trying to send but if you got part of the word you could figure it out. The attached picture shows me, a Pfc, using a knee key at Camp Lejeune in 1956. The other picture shows Marines using the AN/GRC-9 in the Philippines on a NFG (Naval Gun Fire) training and shoot in the early sixties. If you look closely you can see a Marine with the generator and I’m sure some of the old timers have tales to tell about cranking that thing.

In 1965 and ’66, when I was with 2/9 in Vietnam we were still communicating with the P—k 10 and don’t remember when the Marines started receiving the AN/PRC-25. And I wasn’t the wireman MOS 2511 who worked along side of us and were an important part of Marine Communications. That’s all. I’m just an old fart thinking about the good times in the U.S. Marine Corps.

10 thoughts on “Comm Equipment Used In The Corps”