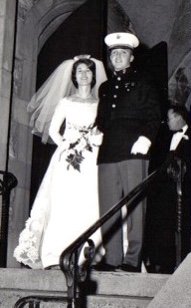 In December of 1964, while I was stationed in Quantico,Va., I married Emma, my college sweetheart .
One year later I was in Vietnam with the Second Battalion ,Third Marines. Emma was seven months pregnant. Before I left for Vietnam, I went to ask Colonel Jonas M.Platt if I could stay in Quantico just two more months to be with Emma when our first child was born. Col.Platt simply said,”Do you think you are the only Marine whose wife is pregnant?”
Today, we have four children and eleven grandchildren. Mike, our firstborn, is 55 years old.
The first time I picked him up was in November 1966. Today, we should never forget the commitment of Marines serving around the globe and their families who make a special sacrifice during times of separation. We are especially thankful and indebted to those who make the ultimate sacrifice and never have the chance to be reunited with their loved ones.