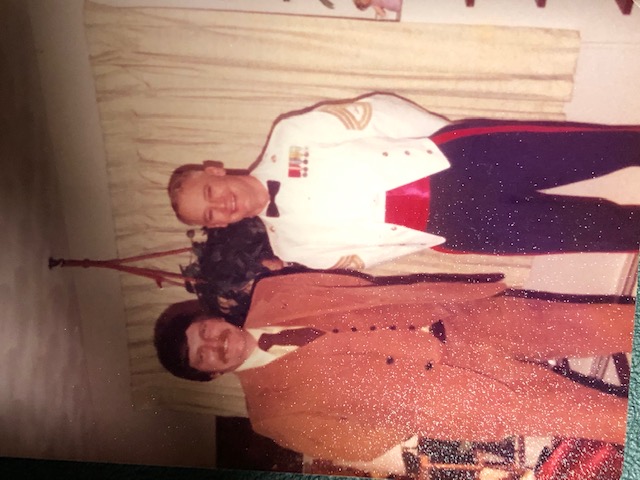 I know that the request was for dress blues pictures but I couldn’t resist also sending a picture of my favorite dress uniform.

The first picture in dress blues was taken at the 1980 Officers Commissioning Ceremony for RS Hartford Ct. With me is 2d Lt Lynn Adams, University of Connecticut, whom I had recruited. She was assigned as a Personnel Officer at Camp Pendleton.

The second pictures in mess dress was before the 1981 USMC Birthday Ball for RS Hartford Ct. The gentleman with me is Bob Darcy, a Marine 1958-1962. Bob was nearly blind in his left eye, but while taking his physical when the doctor said to switch eyes he simple switched hands to cover his left eye instead. It fooled the doctor then but they had the machines when he went for his reenlistment physical and they discovered his blindness. We had the only two basement apartments in a building in New Britain CT. Everyone in the building called us “The Odd Couple.” We had some hellacious poker games and the whole building wanted an invite. The enlisted mess dress was only authorized from 1972-1984, and was replaced by the evening dress with blue coat instead of white. Great times, Semper Fi!!!