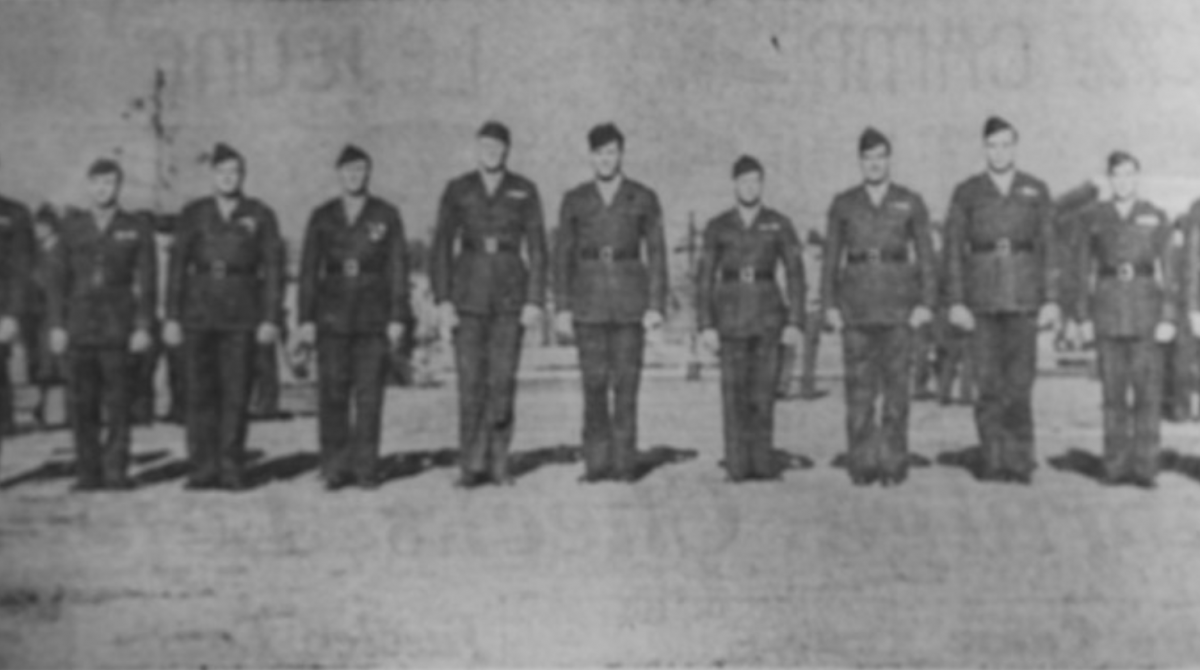 Sgt. Gerkin of Washington, D.C., earned his Bronze Star Medal for distinguishing himself by heroic and meritorious performance of duty while serving with the Marines during combat against the Japanese. He displayed a high degree of courage when his platoon was pinned down by heavy rifle, machine gun and mortar fire after successfully driving the determined enemy from strongly held positions in jungle underbrush. Realizing that it was necessary to get a badly wounded member of his squad to cover in order for him to receive medical aid, Sgt. Gerkin under continuous fire from several direction, carried his buddy, with great effort, across the entire platoon front, over a hill, down a stream and over another hill to safety. This heroic act of grim determination and outstanding bravery distinguished him among the heroes of the war against Japan.

Sgt. Harry G. Smith of Baltimore, Md., was awarded the Gold Star as the result of wounds received at Saipan in November 1943. He suffered his first wound during action in the Marshall Islands on Feb. 1, 1944. He was overseas for ten months.

Sgt. Louis John Cozzens, New Orleans, L.A., was awarded a Gold Star in lieu of his second Purple Heart for wounds received in action during the invasion of Saipan on June 17, 1944. His Purple Heart was presented to him following wounds suffered at Tarawa Nov. 20, 1943. He served overseas for 27 months and also was active in the Guadalcanal campaign.

Sgt. Herbert Meza, Tampa, Fla., received his Gold Star for wounds received at Saipan, June 19, 1944. His Purple Heart award came as a result of wounds received during the invasion of the Marshalls Feb. 1, 1943. He was overseas for seven months.

Cpl. Robert E. Heard, Bradford, Ark., obtained his Gold Star as a result of wounds suffered at Saipan on June 17, 1944. His Purple Heart award came as a result of wounds received at Tarawa on Nov. 23, 1943. Cpl. Heard was overseas for 32 months besides the two campaigns in which he was wounded, participated in the fighting at Guadalcanal and Tinian.

Cpl. Calvin Lawson, Houston Texas, participated in engagements at Guadalcanal, Tarawa and Saipan. He received the Purple Heart for wounds received at Guadalcanal in January, 1943, and earned a Gold Star for wounds suffered at Saipan on June 15, 1944. He was overseas for 22 months.

Cpl. William Robert Hinkle, Bluefield, Va., was first wounded at Namour, Marshall Islands, Feb 2. 1943, and was awarded the Gold Star as a result of wounds received during the Saipan engagement, June 22, 1943. He was overseas seven months.

Cpl. Robert Walter Radish, Milwaukee, Wis., won the Purple Heart as a result of wounds at Namour Feb. 2, 1943, and was awarded the Gold Star in Lieu of the Purple Heart award for wounds suffered at Saipan, June 29, 1944. He was overseas seven months.

Platoon Sgt. Robert Levy, Boston Mass., was awarded the Purple Heart for wounds received at Guadalcanal during the first battle of Matanikan River. He also received the China Service Medal for serving in China during 1938-1939. He participated in engagements at Guadalcanal, New Guinea and New Britain.

All these Marine veterans are now assigned here for duty.

3 thoughts on “EIGHT GOLD STARS, ONE BRONZE AND ONE PURPLE HEART AWARDED”