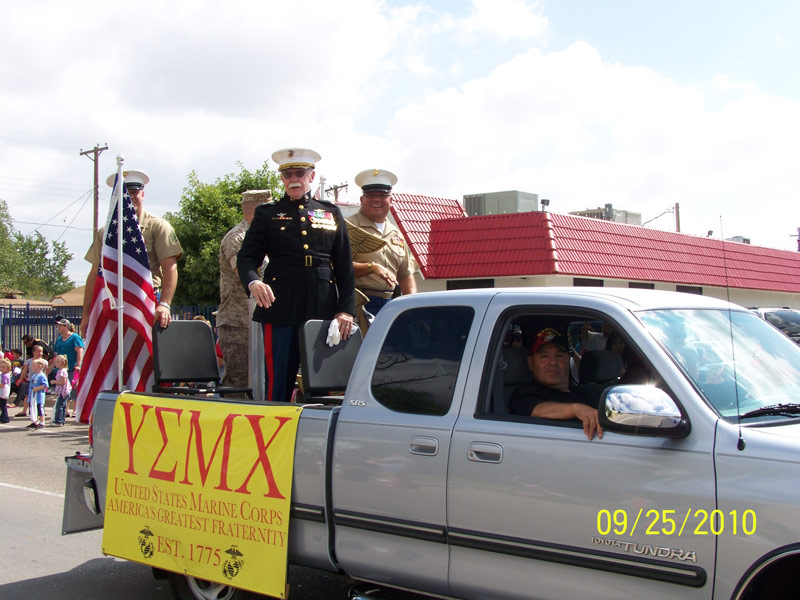 A few Marines participated in the homecoming parade at Eastern New Mexico University in Portales, NM. My partner and I decided it was time to represent Marine Corps veterans by participating in the parade. We created our banners by utilizing a design from one of your T-shirts. Needless to say the parade went off quite swimingly. We had 100% positive feedback from the spectators, minus a few fraternity members. HaHa.

The participants are identified from left to right in the photo where we are standing at the rear of our vehicle. Sgt John Mondragon 81-85, Leroy Manzanares Vietnam Veteran, Lt Col Dale Davis 45-67, Sgt Joshua Duke 00-08, Sgt Glenn Russ 94-98.

It should be noted that Sgt Mondragon went on to proudly serve and retire in the New Mexico Army National Guard. Sgt Duke served 4 tours in Iraq. Lt Col Davis served as an enlisted and officer. He was wounded in Korea by Chinese mortar fire. He taught as a professor of business and marketing at ENMU and retired after 33 years in that position. He is a cancer survivor and an inspiration to the men lucky enough to be on that vehicle with him.

Finally, a special thanks to Keith Wattenbarger of the 1st Civ Div who volunteered to drive these proud band of brothers. Last but not least thanks to Sgt Grit for providing several of the uniform items and for your patriotism.

As we shoved off for the parade I heard someone say it was a good day and the Colonel reply, "It's always a good day when you're with other Marines."

One thought on “ENMU Homecoming Parade”