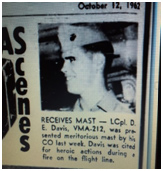 JP4 jet fuel used in Naval Aviation was so volatile we used it as fuel for our Zippos. Sometime in the early "60's" the Navy switched to JP5 which was less volatile and thus much safer on carriers. After the switch to JP5 we had to go back to PX lighter fluid because the JP5 mix needed more than a spark from a flint to light the flame. The jet fuel was delivered to our flight line in 8,000 gallon tanker trucks full of JP4 on the night of the fire on the VMA 212 flight line.

I was a plane captain on A4D's in VMA-212 at Kaneohe Bay from '61 to '63. One night in '62 during the refuel process the pump that supplied pressure to the fuel hose caught fire. This pump was located in the space between the cab and the tank. The fuel hose was connected to one of our A4's and fuel was being pumped into the A4 under pressure. I was a couple airplanes down the line when I noticed flames shooting up from the truck. Eight thousand gallons of highly volatile JP4 was about to blow up and wipe out most of our squadron, everyone on the flight line and probably a hangar or two.

The line chief on duty that night was Sgt. Ralph Strickland and the plane captain closest to the fire was L/Cpl "Dink" Davis. Dink grabbed an extinguisher and climbed up on the truck above the fire with one foot on the cab and the other on the tank, flames shooting up around him, and discharging the extinguisher into the spreading fire. The fuel hose was still connected to the airplane when Sgt. Strickland ran from the hangar, jumped into the now vacant driver's seat and commenced to drive the truck away from the line towards the bay. The fuel hose ripped off the airplane and Dink was riding the top, still fighting the flames, as the truck sped towards the bay. Just seconds before crashing into Kaneohe Bay, Dink had the fire out and Sgt. Strickland stopped the truck. The heroic actions of these two saved a lot of lives and airplanes that night. Both were recognized for their bravery with a meritorious mast by the C.O. of the squadron. Attached are articles from the base paper at the time, the "Windward Marine" that don't tell the full story.

The caption under Strickland is incorrect. He was in 212 and LeFaivre was our CO.

One thought on “Fire On The Flight Line”