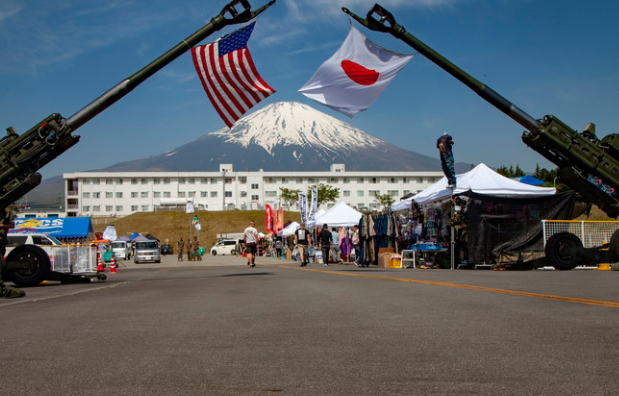 Combined Arms Training Center Camp Fuji annually hosts one of the largest community relations festivals between the U.S. and it’s host nation friends. The friendship festival is open to all to experience a number of Marine Corps and Japanese traditions, as well as cultural vents.

“The festival helps build the relationship with our good neighbors by building morale, camaraderie, and partnership,” said Sgt. Christopher Oberlin, the section chief for the artillery static display. “We’re able to bring in the community and show them what we do as Marines, and we are closer for it.”

The thousands of visitors that attended the event explored the Marine Corps and Japanese Ground Self-Defense Force static displays that included tactical vehicles, artillery weapons, protective equipment, and aircrafts. There was also a kiddie land, live music and a multitude of vendors selling food, apparel and accessories.

“Today I look around and am encouraged as I see the friendships and harmony that we have,” said Col. Michael Reilly, the commanding officer for CATC Camp Fuji. “This installation is special and vital as it plays a significant role in strengthening the alliance with the Japanese military.”

The camp has a history of a strong relations with the neighboring Japanese self-defense force and local community.

“Today’s festival is our way of returning the hospitality and graciousness that we enjoy every day,” said Reilly. “This is our way of saying, thank you.”