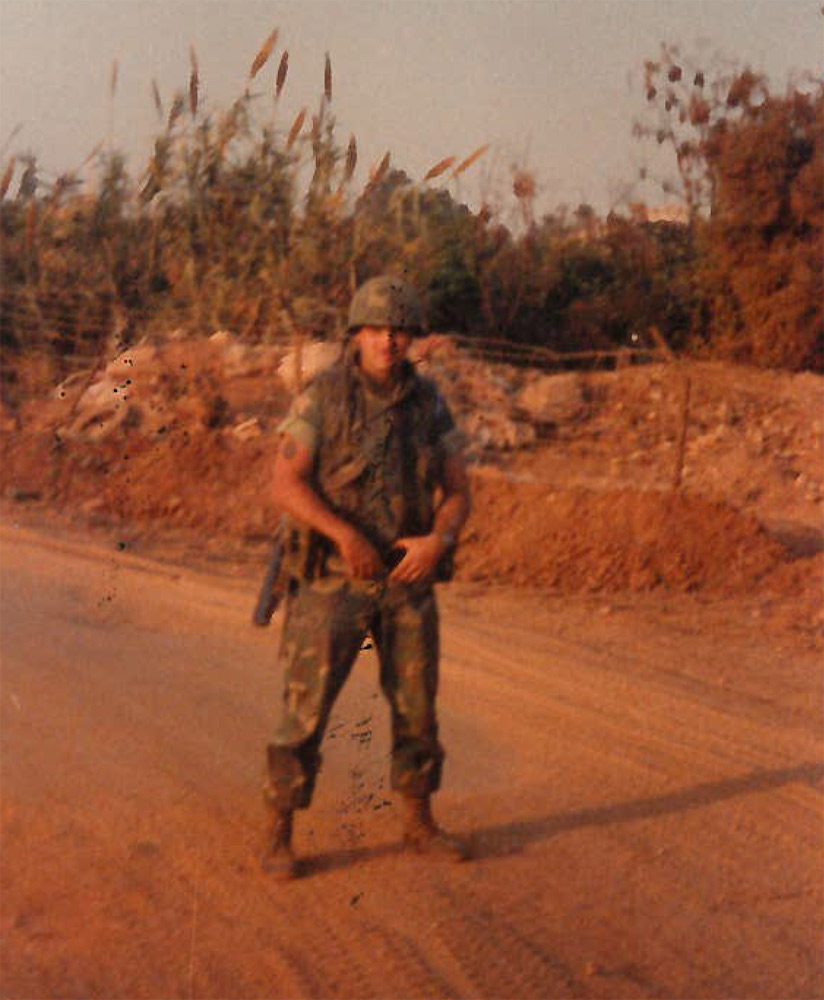 Here are two photos from Beirut circa 1982-83. The top photo is of me standing on the perimeter road down by the airport and the Sh-t River in an area we referred to as The Swamp. 2/8 had set up a series of sandbag bunkers along this road before we relieved them and we would man the bunkers and patrol the road, probably as they had before us. My recollection at this point is not always clear and I can’t recall now where the Sh-t River (just a nasty-azsed stream that paralleled the airport runway) actually came from direction-wise, but it did parallel the runway at least for several hundred yards toward the sea and separated our area from the airport runway. “Hey Joes” (what we called the locals who were trying to sell us sh-t) would come up to that berm and fence behind me in the photo and were always hawking food, cigarettes, sodas and liquor, but before long the CO, Captain Chuck Johnson, banned the interaction with them. At night sometimes, voices would come from that area making verbal threats toward us and they (we never knew who) would at times slip in between the bunkers and pull on the land lines connecting the hand-crank phones or cut them altogether.

Funny side bar story – when we first relieved 2/8 they built a bunker at the end of the runway just on the other side of the Sh-t River. I am assuming that when 2/8 was there the airport was either not active or at least not that particular runway, however, not long after we relieved them, planes started taking off daily and from that runway at least several times a day. Depending on how big and powerful the plane was, the back blast on take-off would blow the roof off the bunker. After replacing it several times we relocated the entire bunker to another spot. I was personally never in that bunker but I did witness the roof being blown off on two occasions and it was hilarious. The Marines inside the bunker would stand up after the plane took off and start laughing. It would have made for a great hidden-camera comedy show even by todays humor standards.

The second photo is of me on Christmas Eve 1982 up at University. The BLT gave us each a bottle of hooch for Christmas. Most of us not on post or getting ready to go on post showered up and sat around listening to Christmas Carols on someone’s cassette tape recorder and drank our wine. Playing cards and reading was about all we had to do in the evening. Also around this time a private girls school in Baltimore sent care packages and a nice letter to each Marine from Maryland. It was a wonderful gesture by the girls and very much appreciated. Each package had candy and snacks, books and toiletry items and a letter thanking us for our service. Not a very happy time, but we made the best of it. We had a Christmas Tree and one Marine had somehow purchased a Monopoly game down in one of the Christian villages not far from our compound. The entire game-board and all of the money was written in French but each of us knew the game well enough to work around it. I knew just enough French (four years of it in grade school and high school) to decipher what we could not visually work through, but it kept us busy and was still fun.

3 thoughts on “Funny Side Bar Story”