H Company, 2nd Battalion, 26th Marine Regiment (Vietnam) held a reunion in Arlington, Virginia, August 31st – September 6th, 2015. We held a Memorial Service at the Iwo Jima Memorial for the 74 Marines and Corpsmen we lost during our time in Vietnam. Our guest speaker was Rear Admiral Brent Scott CHC, USN, Chaplain of the Marine Corps. Our Invocation was given by Commander Stephen Coates CHC, USN, Assistant Deputy Chaplain of the Marine Corps.

The Bugler that played Taps was MGySgt. Mathew Harding from the Marine Corps Band “The Presidents Own” and we had a Color Guard from 8th and I.

I am going to attach the write up from the Marine Corps Public Affairs that they did about the Ceremony and contains several pictures that they took. I am also attaching the program for the Ceremony. 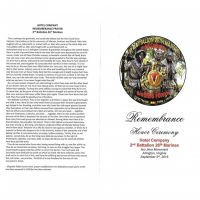