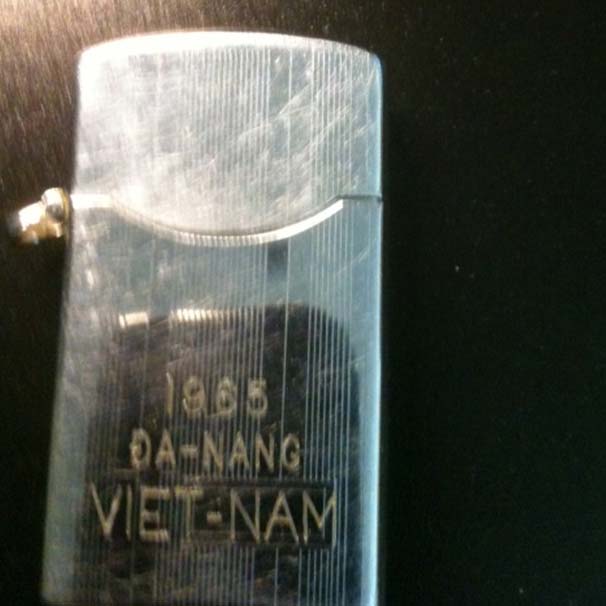 There have been many articles through the years on the "Zippo" lighters that Vietnam Vets used for various things besides lighting cigarettes. I bought my Zippo in September 1965 about 10 miles south of DaNang from Vietnamese women villagers that sold us "Vietnam" berets, elephant soap, and other memorabilia. My Zippo was one of the very few things I came back with. I still have it in my drawer, but haven't used it since Vietnam.

One day our Company Commander asked me & Lance Cpl Jim Tate to place communication wire in the valley just north of Hill 327. Tate drove the jeep & I rode shotgun and off we went. I was a PFC at the time.

Tate said he would lay the wire and wanted me to be shotgun. Most of the area was rice paddies. At one point, he went under a bridge with the wire that the Seabees had built. When he came out the other side he was screaming real loud for help and was covered by bloodsucking leeches. I quickly lit a cigarette and handed it to him so he could apply it to the leeches. I took my Zippo and began burning the leeches off his body. It seemed to take forever at the time, but it worked.

The next day Tate & I were back on Hill 327 when we heard all kinds of firepower and air strikes from the valley below where we had laid the comm wire. A Company of Marines were attacked, and the results were numerous causalities. Tate and I had no idea we were that close to death the day before.

I lost track of my buddy Tate, hope he made it back to Mississippi, would love to hear from him.