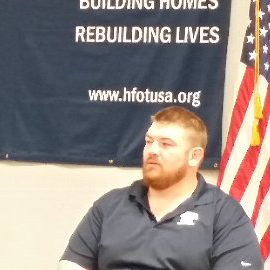 On Saturday, I attended a ceremony turning over keys to a new house presented by Homes for our Troops to Marine L/Cpl Thomas Parker in Polson, MT. Parker was wounded in Afghanistan in 2010 as a member of 3/5. Veterans greeted him at Missoula Airport in January 2011 on his first trip home. This is the first HFOT home in Montana. One year ago, my wife and I also attended a home turnover by Homes For Our Troops to Marine Sergeant Justin Maynard in Cottonwood, AZ.

The homes that are built include a flag pole, and the first element of the ceremony is the raising of our National Colors prior to the ribbon cutting. For Marines in particular, there is one Flag missing – the Marine Corps flag.

Through the work of Milt Cruver, I understand that Sgt. Maynard was presented a Marine flag by your organization. We want to make sure that L/Cpl. Parker also has a Marine flag (in fact, I promised him we would see that he got one to which he was very grateful).

Homes For Our Troops is an outstanding organization that has built 180 homes for wounded warriors from all military service branches with 49 more planned or awaiting qualified recipients. I applaud those who have donated time and money to this noble effort. As Tomy Parker said, the custom home provides simple yet necessary accomodations for providing independence to those who have been severely wounded. Their website is at HfoTUSA.org, if anyone is interested in volunteering or wishes to support in some way.

Following are some pictures of the events on Saturday… they started at the local VFW (weather was snow, some ice, and in the 20's) before moving to the ribbon cutting ceremony at the new home.