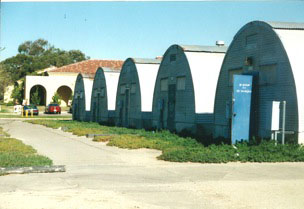 BOY! Do these photos bring back MEMORIES!

Too bad the few remaining huts have fallen into such disrepair. I went to the USMC Scout Sniper Association reunion a few years ago in San Diego and we as a group attended a recruit graduation. Things have really changed since I went thru MCRD in ’64. For one thing, on that grad day the recruits did not march in review like we did back then. They were marched out by platoons, lined up in front of the reviewing stand and just stood there while a Colonel gave a congratulation speech. Then they were dismissed and that was it. (R. Lee Ermey showed up and visited with some of the officers and DIs, then left without even a nod to us).

I wandered around for a while and found my old platoon street in the old 3rd RTB area. There were about a dozen huts there including the one I was in and that was it. All were being used as storage sheds and the ice plants had taken over the Drill Instructor’s Grass area in front of the huts. Not the little neat rows that we had to plant and maintain and rake lines between the rows (to show any boot prints in case someone stepped in the dirt/plant area).

41 thoughts on “I Wandered Around For A While”