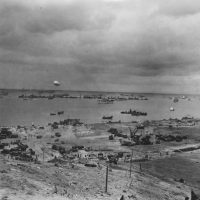 June 6, 1944 marks the 76th Anniversary of Allied Forces landing on a 50-mile stretch of the heavily fortified Normandy coastline. Comprising British, Canadian and American soldiers, the invasion was one of the largest amphibious military assaults in history with more than 73,000 American soldiers making the initial landings with the support of nearly 7,000 US Navy vessels. Although Marine Corps involvement in the Pacific theater of World War II is well known, there were some Marines that participated in the European campaign as well. Marine Major General Robert O. Bare was awarded the Bronze Star for his efforts on D-day and obtaining valuable intel as an observer attached to British Assault Force J. See these photos from the Robert O. Bare Collection depicting what he saw on the beaches of Normandy!