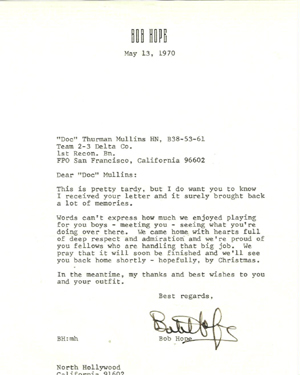 In December of '69, word came down to Hill 119 that a couple of guys would get to go see the Bob Hope show at Freedom Hill. Several of us had joked that getting to see the Bob Hope Show for free was one of the reasons we had volunteered for Nam. As it turned out, I couldn't go according to somebody in the rear since I was the only Corpsman on the hill. When the lucky ones came back, one of the guys was somehow able to get me an autographed picture of old Bob his-self. Well, as you know; 8X10 glossies didn't fare too well in the rain and the sandbag bunkers and my autographed photo was in pretty bad shape when we rotated off of the hill.

Sometime later, I took pen in hand and wrote Mr. Hope a letter asking for another picture. On the envelope I addressed it simply "Mr. Bob Hope/Hollywood, California" and wrote free where the stamp would have gone and sent it on it's way. I didn't figure, I'd ever hear any-thing back from it.

Today I went down to the lock box and got out the attached photo and letter to show my kids and their kids. I recently read in a newspaper article that Mr. Hope answered every letter that a service man sent him. The attached photo and letter are to me like the man that brought "home", to the Military all over theglobe: They, like him, are priceless.

One thought on “Letter From Bob Hope”