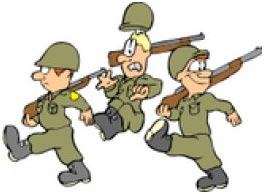 Being short was never a big concern for me because I had never considered it as a disadvantage. I had always been husky and solidly built in my youth and able to handle any physical confrontations that arose. That didn’t change when I entered the military. In fact, I flourished in that environment. Prior to joining the Marines I had spent a short hitch in the Army and dazzled my drill sergeants with high scores on their boot camp physical fitness tests. I did the same in the Marines. However, Marine Corps training differed from the Army. It was more intense and disciplined.

I am living proof to this fact. I entered the Army at 142 lbs. and graduated recruit training at the same weight. I enlisted in the Marines later at the same 142 lbs. and finished boot camp at 152 lbs. All muscle, no fat. The term which comes to mind now though is “has been”. It seems my girth has undergone some horizontal expansion as I approach retirement age.

While in the Marines I encountered a few situations which required a brute strength solution. My best friend “Wild Will” was a fairly large and powerful individual. We worked out together often. After one grueling work out and 3 mile run we returned to the base gymnasium. Will had tagged me with the handle “Junior” since I was the shortest Marine in the unit. That moniker followed me for a long time.

After cooling down and resting a while, Will began to poke fun of my height, which he often did. Usually I ignored his good natured jabs, but that particular day I was in a cranky, cross mood and I shot back a witty reply about his mother. This was a serious breach of Marine Corps conduct. Chapter 3, Paragraph 6, subsection B in the unofficial Marine Guide states, clearly no Marine can ever insult another Marine's mother. It was on now!

Will challenged me to a wrestling match right then and there. I had seen him wrestle before and no doubt about it, he was good. But I also had done some wrestling on my high school wrestling team and had been deemed as no slouch. This was going to be a real David and Goliath matchup. Other patrons of the gym quickly assembled around to watch the spectacle and bets were made…mostly against me losing.

A toss of the coin decided I was to take bottom position. Someone hollered GO! and the match began. At first we seemed evenly matched but after a few minutes of struggle I had him pinned. See gals…size doesn’t always matter.

But I didn’t always win, especially if I had been drinking. I had a serious drinking problem in those days which I never admitted to. Fortunately, now I no longer have that problem. But during that time Will and I spent a lot of off hours in downtown bars getting a snoot full. I was easy to spot. I was the little guy at the end of the bar with a black eye.

These events took place in my early days as a Marine and I still had my boot camp physique. As years rolled by though, I began to add a few pounds. This was bad career wise as the Marine Corps frowns on obesity.

In fact, they despise it so much; to be promoted to staff NCO a front and side photograph must be submitted along with recommendations. Needless to say, my short, stocky body didn’t look like a picture poster Marine and I was passed over every time. It didn’t matter I had perfect proficiency and conduct marks and a first class physical fitness rating. It all boiled down to the photograph. Apparently the Brass wasn’t too impressed with the photos, but I thought the pictures were cute…well, at least my mom thought so.

So, after being denied promotion several times I decided it was time to seek other employment while still young enough to learn another field of endeavor.

Actually I wish I could have remained in the Marines…but it’s no big deal!