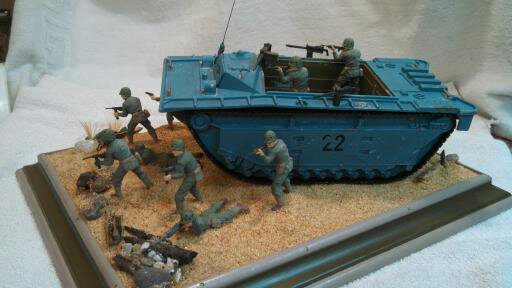 I have attached a few pictures of an LVT diorama that I made for a WWII Marine vet who went ashore on Tarawa and got hit and spent 11 months in the hospital. By that time the war was over for him. We became good friends and I built this for him and I must tell you it really touched him and his sweet wife. It made me feel pretty good too that he liked it so much. By the way my wife did the sand and wood and stuff and I did the LVT and Marines. It is in 1/32 scale and toughest parts were the camo on the helmets and the eyeballs.

By the way I am a model builder and I need some pictures of one of the landing craft we used on Guadalcanal. It was the one without a drop down door on the front like the Higgins boats I was on when I was in the Marines. Do you know of anyone I could reach out to for pictures?