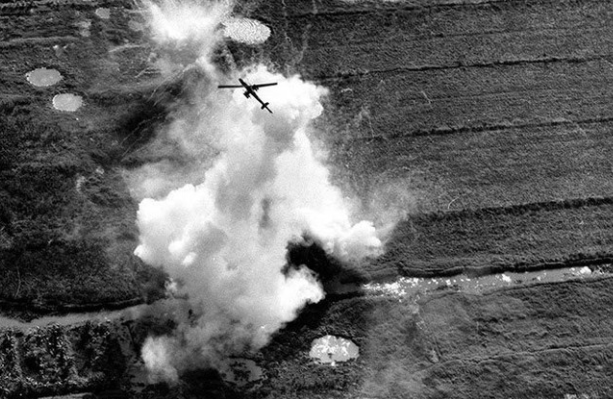 Marine Aircraft Group 36, 1st Marine Aircraft Wing, the first complete Marine air group to be transported by sea to a combat zone, launched from the USS Princeton to the shores of Vietnam, Sept. 1, 1965. Immediately, they began providing troop lifts, air strikes, medical evacuation, resupplies, and reconnaissance insertions and extractions in the southern area of operations.

“Gaining and maintaining air superiority in any theater is a priority,” said Brig. Gen. Thomas D. Weidley, commanding general, 1st MAW. “The ability to insert and extract Marines [in Vietnam] kept our ground forces in the fight while also providing injured Marines the help they needed.”

Most Tet Offensive attacks were defeated in hours or days. However, Hue City, considered the spiritual center of Vietnam and an essential strategic stronghold for American troops, was held tightly by North Vietnamese forces.

For 26 days, Marines and South Vietnamese soldiers fought house-to-house and street-to-street, emptying each individually. As fighting ensued, MAG-36 provided them with air support and inserted Marines into the fight. They also extracted the injured and fatally wounded in Hue despite the difficulty brought forth by monsoon season.

“Flying in inclement weather of any type can cause a lot of concern,” said Col. James F. Harp, commanding officer, MAG-36. “The adverse conditions could cause reduced visibility resulting in [crashes], especially because these pilots were flying in a new environment.”

In all, three Marine battalions and 11 South Vietnamese Army battalions were committed to retaking the city. After suffering nearly four thousand casualties between the American and South Vietnamese forces, the battle for Hue City came to an end at midnight on Feb. 27, 1968.

After the battle for Hue City, MAG-36 remained in Vietnam and provided support in their area of operations for nearly two years. Eventually, it was decided by Headquarters Marine Corps to move the group out of Vietnam. On Nov. 4, 1969, they moved to Marine Corps Air Station Futenma, Okinawa, Japan.

Once on Futenma, in 1970 MAG-36 began providing composite helicopter squadrons to the 31st Marine Amphibious Unit Afloat, later renamed the 31st Marine Expeditionary Unit. Presently, MAG-36 serves as the Okinawa-based aviation group within 1st MAW, the aviation combat element of III Marine Expeditionary Force, with detachments from its squadrons deploying every year alongside the 31st MEU to provide humanitarian assistance and train all over the Pacific region.

“Today our Marines are definitely prepared to go out anywhere in the Pacific and provide support,” said Harp. “We are constantly preparing and always ready to go out and do what Marines do, which is fighting our battles and winning.”