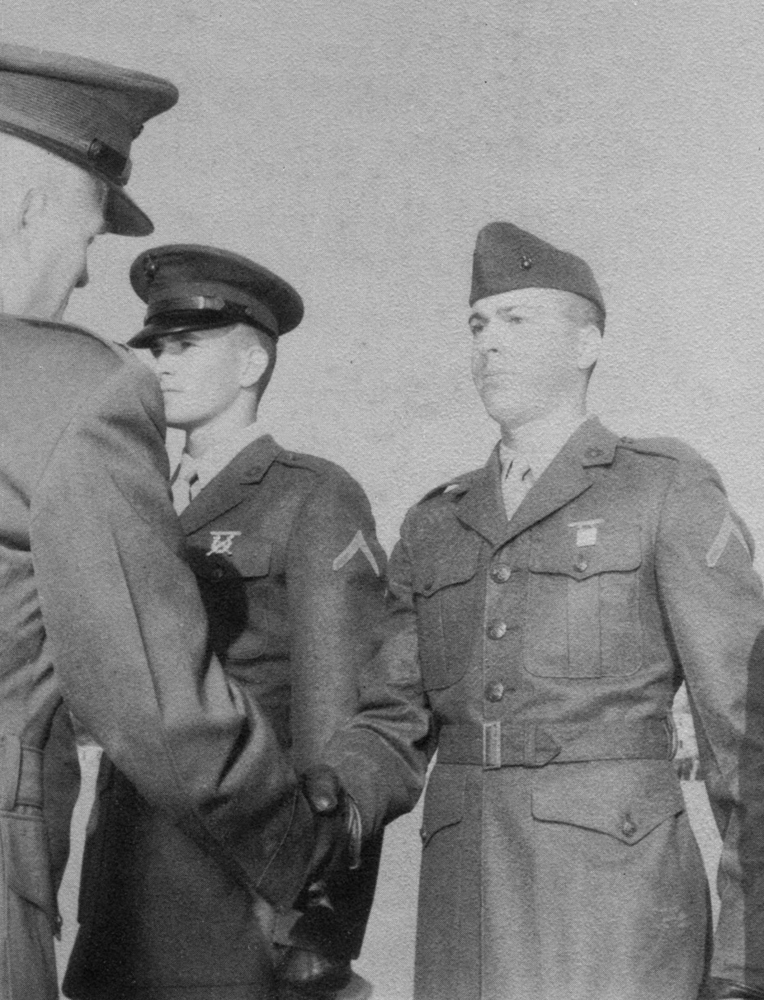 This picture shows me receiving the “Outstanding Member” of my platoon award during Boot Camp graduation ceremonies at Parris Island in late November 1961. As you can see I was wearing a “P-ss Cutter” instead of a barracks cap and that was because clothing issue was out of my size. You might wonder how someone wearing a Rifle Marksman badge managed to win the award. Well, let me tell you.

I fired the rifle range with my favorite rifle of all time, the U.S. Rifle Cal .30 M-1 and I had fired a solid average of about 228 all week and I was well on my way to qualifying as Rifle Expert. As luck would have it as I started to fire the 500 yard line slow fire string of 10 rounds on pre-qualification day, the sear in my trigger housing group broke and I was suddenly firing an automatic M-1. I went to the online armorer and he replaced my trigger housing group but that was the end of firing for the day.

Of course anyone who ever fired the M-1 knows that just replacing the trigger housing group messed up the dope on my rifle. We weren’t even allowed to break them down for cleaning the last week on the range. Anyway, the next day on qualification day I was given the chance to fire three spotter rounds to get my dope back. I am sorry to say that didn’t help much so I wound up firing a 209 which was Marksman and one point short of Sharpshooter. I fired expert later with another M-1 at my permanent duty station but of course that didn’t help my Boot Camp Score.

I reported to my first duty station which was Marine Detachment CINCLANTFLT Headquarters in Norfolk, Va. in January 1962. Here is another picture that was taken when I was orderly for Deputy SACLANT. While I was there I performed security guard duties and also became orderly/driver/body guard for Deputy SACLANT. In March of 1964 I was transferred to F/2/2 at Camp Lejeune where I was a squad leader and while at Lejeune we were deployed to Guantanamo Bay, Cuba and we were part of the 2nd. M.E.U. that took part in Operation Steel Pike 1 in November 1964. After being extended in August 1964, I was transferred to I/3/6 at Lejeune.

I joined the Corps on 31 August 1961 and was discharged on 30 August 1967. I was released from active duty on 20 December 1965 with the rank of Sgt (E-5). My active duty was extended as a convenience of the government because of Viet Nam. I spent the last three months of my active duty tour as a Marksmanship Instructor on the Second Division Rifle Range at Camp Lejeune, North Carolina.

I was a member of Platoon 262 in Boot Camp and we were the last series at P.I. to be issued the M-1 rifles. The new series coming in were drilling with the fragile M-14’s. Three years later when I was transferred to Camp Lejeune I was issued an M-14 too. We lived in the old WW2 H-shaped wooden barracks and I am saddened to see that design gone.

One thought on “Managed To Win The Award”