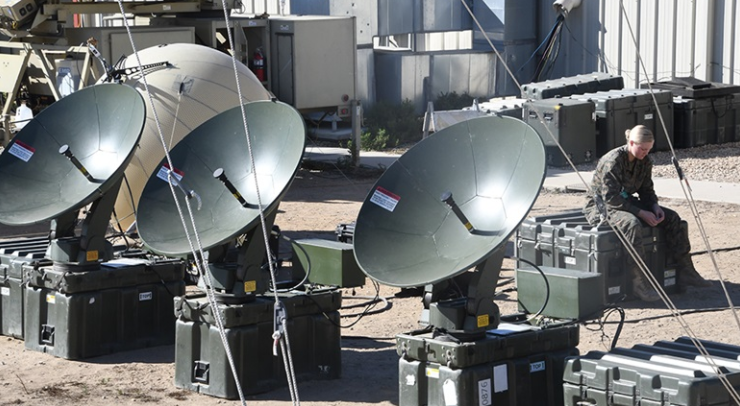 The VSAT program includes expeditionary, small, medium and large systems. It is capable of supporting high-bandwidth voice, video and data applications to support the exchange of intelligence and logistics information throughout the operational environment. The working group is currently focused on a replacement for the VSAT medium.

Over a year ago, MCSC conducted a system analysis on the reliability decline of the VSAT FoS. One of the biggest trends noted was hardware failure.

“In order to focus on the Commandant’s goal of improving readiness while simultaneously modernizing the fleet, we are focused on finding a solution,” said Konicki.

Because these systems were originally fielded in 2008 as a commercial-off-the-shelf system, some of the subcomponents are no longer available on the commercial market and cannot be repaired. Additionally, there are no similar components that can provide the same capability to keep existing VSAT systems up and running, Konicki said.

“The Marine Corps is reliant on data, in terms of the internet and streaming videos, for both intelligence purposes as well as real-time information on the ground,” Konicki said. “Without a robust satellite communications capability, this isn’t possible.”

Plans to employ the new systems also include making it smaller so it will be easier to deploy, transport, setup and breakdown.

Currently, it takes two Marines approximately 30-45 minutes to set up a VSAT medium. The SATCOM Team at MCSC wants to reduce that time to 10-20 minutes and take the burden off the fleet by offering a lighter system.

“Our team is focused on finding an operationally reliable capability that can be up and running in minutes,” said Scott McCoy, VSAT project engineer at MCSC. “To increase readiness and the Marines’ ability to gather intelligence and real-time information through satellites, it’s important to design the VSAT as a modular system. Modularity does two things: it reduces maintenance timelines and costs by utilizing common subcomponents across the VSAT FoS; and it gives Marines the flexibility to configure their equipment for specific mission needs. There is no need to deploy with seven transit cases worth of equipment if only three will do.”

A Request for Information for a VSAT-medium replacement was released to industry in October 2017. Konicki says a formal Request for Proposals is planned for some time during the third quarter of fiscal 2018.

The project to acquire a new SATCOM system is a joint effort between subject matter experts from Headquarters Marine Corps Capabilities Development and Integration, Marine Corps Tactical Systems Support Activity, operational forces representatives, and Headquarters Marine Corps C4 maintainers and operators. The intent is to field a VSAT-medium replacement system by 2020 to major subordinate commands within the Marine Expeditionary Forces, and to field the full complement of the replacement VSAT by 2023.