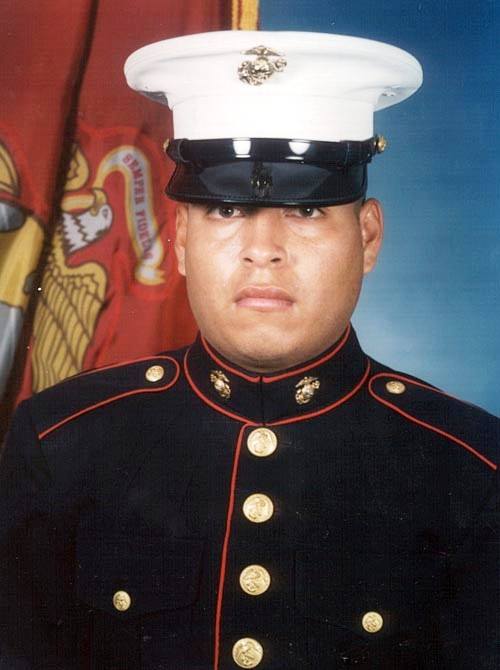 Sgt. Rafael Peralta
1st Battalion, 3rd Marines, Regimental Combat Team 7, 1st Marine Division
Fallujah, Iraq, November 15 2004
Award: Navy Cross (Posthumously)
Clearing scores of houses in the previous three days, Sergeant Peralta asked to join an under-strength squad and volunteered to stand post the night of 14 November, allowing fellow Marines more time to rest. The following morning, during search and attack operations, while clearing the seventh house of the day, the point man opened a door to a back room and immediately came under intense, close-range automatic weapons fire from multiple insurgents. The squad returned fire, wounding one insurgent. While attempting to maneuver out of the line of fire, Sergeant Peralta was shot and fell mortally wounded. After the initial exchange of gunfire, the insurgents broke contact, throwing a fragmentation grenade as they fled the building. The grenade came to rest near Sergeant Peralta’s head. Without hesitation and with complete disregard for his own personal safety, Sergeant Peralta reached out and pulled the grenade to his body, absorbing the brunt of the blast and shielding fellow Marines only feet away. Sergeant Peralta succumbed to his wounds. By his undaunted courage, intrepid fighting spirit, and unwavering devotion to duty, Sergeant Peralta reflected great credit upon himself and upheld the highest traditions of the Marine Corps and the United States Naval Service.​​​​​​​

8 thoughts on “MARINE OF THE WEEK // SELFLESS SACRIFICE”