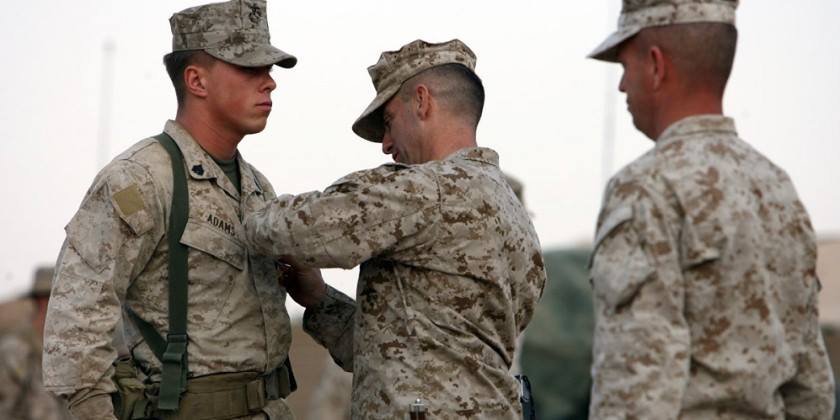 In downtown Husaybah, Iraq, then-Corporal Adams’ patrol came under intense enemy fire causing the lead vehicle to crash. He exited the vehicle and began returning fire as fellow Marines attempted to dislodge the vehicle from the wall. After freeing the vehicle and retrograding back to Camp Gannon, the patrol realized one of the vehicles was separated and needed to be located. Re-entering the kill zone again, his vehicle suffered a direct hit from a rocket-propelled grenade, causing the vehicle to erupt into flames. Corporal Adams exited the vehicle and began to fire on enemy positions. Suffering from multiple shrapnel wounds and burns, he began returning fire on enemy positions while trying to communicate with the Command Post. Realizing that the turret gunner was still inside the burning vehicle, he jumped back inside the burning wreckage, subjecting himself to the imminent threat of exploding friendly munitions from within the vehicle and enemy fire, refusing to depart the area before retrieving the fallen Marine. Freeing the gunner from the turret, and suffering from multiple wounds, he carried the gunner across the intersection under enemy fire while the remaining Marines provided suppressive fire on the enemy threat. By his bold leadership, wise judgment, and complete dedication to duty, Corporal Adams reflected great credit upon himself and upheld the highest traditions of the Marine Corps and the United States Naval Service.

12 thoughts on “MARINE OF THE WEEK // Under fire, pulled his fallen comrade from the burning Humvee”