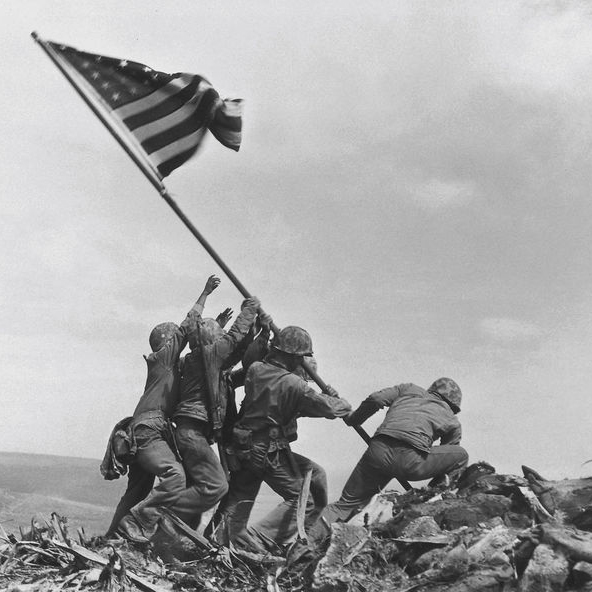 An Omaha amateur historian’s quixotic effort to rewrite the story of one the most famous photos in American history has prompted a reaction — and possibly a correction — from the U.S. Marine Corps.

The Marine Corps has launched a review of the iconic Iwo Jima flag-raising photo, Marine Maj. Clark Carpenter confirmed Friday, while declining to provide other details.

That review is headed by a three-star general and is tasked with examining all elements of the photo, including the identities of the men pictured, according to a source close to the review.

The inquiry could erase and rewrite one of the most hallowed facts of Marine Corps history: the names of the six men long identified as flag raisers.
Since 1947, those flag raisers — John Bradley, Harlon Block, Rene Gagnon, Ira Hayes, Franklin Sousley and Michael Strank — have been undisputed, regarded with the same certainty by Marines and military historians as the rest of us know the flag they are raising is red, white and blue.

The flag raisers who survived World War II — Bradley, Gagnon and Hayes — became household names in postwar America, and all six have been honored in war memorials, statues, postage stamps, songs, and in “Flags of Our Fathers,” a best-selling book by James Bradley, John Bradley’s son, that became a Clint Eastwood-directed movie.

There is just one problem: The official history is wrong, an Omaha amateur historian who runs a Marine website has long argued.

The World-Herald first revealed Eric Krelle’s theory in a 2014 article that detailed his case that the identities of the flag raisers were mistaken.
He and an Irish amateur historian named Stephen Foley spent months examining hundreds of other photos and film footage taken in the minutes before and after that famous photo was snapped by Associated Press photographer Joe Rosenthal atop Iwo Jima’s Mount Suribachi on Feb. 23, 1945.

Using photo analysis of clothing, weapons, facial features and finally a lone strap hanging off a helmet, Krelle made the case that John Bradley, the most famous flag raiser, wasn’t actually in the photo at all.

“People can hold onto what they have always known in the past,” Krelle said in 2014. “But to me, the photos are the truth.”

Krelle declined to comment Friday about the Marine Corps investigation, citing a confidentiality agreement he signed with a third party.

Harold H. Schultz left the Marine Corps at the end of World War II and after he was awarded a Purple Heart. He moved to Los Angeles and became a U.S. Postal Service employee. He married late in life and never had children. He attended Marine Corps reunions and kept a small scrapbook of his time in the war. He died in 1995, having never breathed a word about the famous photo on Iwo Jima or his potential place in American history, his stepdaughter Dezreen MacDowell said in 2014.

Two years ago, when presented with this alternative version of a long-established history — with the argument that Schultz was in the iconic photo, and Bradley wasn’t — veteran military historians expressed doubt as well as an unwillingness to publicly dispute the Marine Corps’ version of events. Several flat refused to look at Krelle’s research. One said he would rather go fishing.

That interest level is sure to change with the news that the Marine Corps has opened an investigation into the identities of the flag raisers. It’s the first and only time the Corps has done so since 1946, when the family of Harlon Block, a U.S. congressman and a public outcry prompted the military to act.

Until that point, the Marine Corps had identified the sixth flag raiser as Hank Hansen, and cited as evidence affidavits signed by the three surviving flag raisers swearing that Hansen was in the photo.

But in January 1947, the Marine Corps announced the result of that first investigation: Block was in the photo, and Hansen wasn’t. The surviving flag raisers signed new affidavits. Official Marine Corps history was changed. The updated six names were literally etched in granite at the base of monuments depicting the famed flag raising.

James Bradley declined an interview request on Friday afternoon. In 2014, he looked at Krelle’s research but said it failed to convince him that his father wasn’t pictured in the famous photo. He noted that John Bradley, a famously reticent man, would have likely loved the chance to remove himself from the photo.

“Listen, I wrote a book based on facts told to me by guys who had actually been there. That’s my research. That’s what I trust,” he said.

There’s no known timetable for when the military will release its findings.

One thought on “Marines Have Launched A Review”