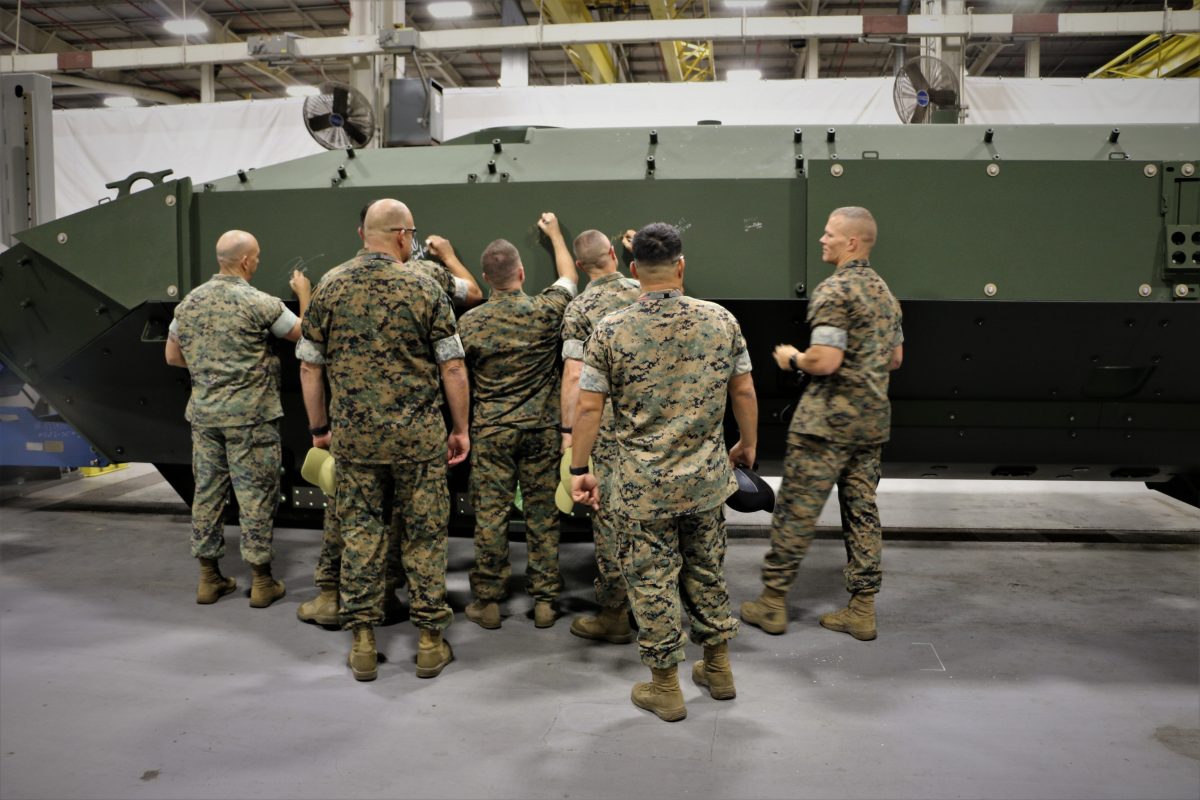 Marines from the 3rd Assault Amphibian Battalion—slated to receive the first of the Corps’ new Amphibious Combat Vehicles—received the rare opportunity to visit the ACV’s main production facility and meet with the workforce building the vehicle.

Col. Kirk Mullins, program manager of AAA, under which the ACV program falls, said the event was a collective decision between himself and leadership at BAE, the vehicle’s manufacturer.

“We thought it would be really good for the workforce to actually meet some of the Marines for whom they’re building the vehicle—the Marines who will take these vehicles and employ them, potentially in harm’s way,” said Mullins. “From a Marine perspective, we are typically in ‘receive’-mode of new equipment, but we never really truly understand or appreciate how much work and effort goes into making that piece of equipment.”

During the visit, Mullins and his team emphasized the importance of delivering quality vehicles on schedule to BAE’s workforce. In a message that resonated with BAE’s workforce, Mullins stressed the collective responsibility everyone has to provide the best possible products to protect the men and women serving our nation.

From a high-level perspective, building each ACV is not unlike building a car, albeit a highly sophisticated one. Pieces must be welded together, parts will be integrated and the systems require safety testing once assembled.

Though certain components of the vehicle may be built elsewhere, each vehicle itself is integrated and assembled at York. For a day, the Marine Corps customers were given a behind-the-scenes glimpse of this all in action.

“Seeing the ACV in its various stages of production—from bits and pieces of metal to a full tactical combat vehicle—was definitely enlightening to me,” said Maj. Mark Patridge, a logistics officer from 3rd AA Bn. “What surprised me during our visit—aside from the high-tech stuff that they have there to put the vehicles together—was the level of artisanry, individual skills and personal work required to build each vehicle. It’s actually a very high quality piece of equipment that has had a lot of personal time, personal attention and expertise put into it to be able to provide all of the capabilities that the ACV provides.”

The ACV is the Corps’ answer to the decades-old Assault Amphibious Vehicle, which has been in service since the 1970s. A next-generation vehicle designed to provide increased lethality, survivability and protected mobility to the warfighter, the ACV will be carrying and fighting alongside Marines for generations to come.

“The ACV represents a new chapter in the development of amphibious combat systems, not only building on lessons learned within the amphibious assault community, but also outside the community with its advanced communications systems, weapons systems and the safety features the ACV has to offer,” said Patridge. “The ACV has the potential to enable many of the fundamental concepts—like expeditionary advanced base operations and distributed operations—that the Marine Corps is trying to put into practice.”

The Marine Corps started accepting delivery of the ACV earlier this summer. The AAA program office is currently conducting live fire testing and performing logistics demonstration procedures on the vehicles in preparation for integration, operational tests and evaluation scheduled for next summer.