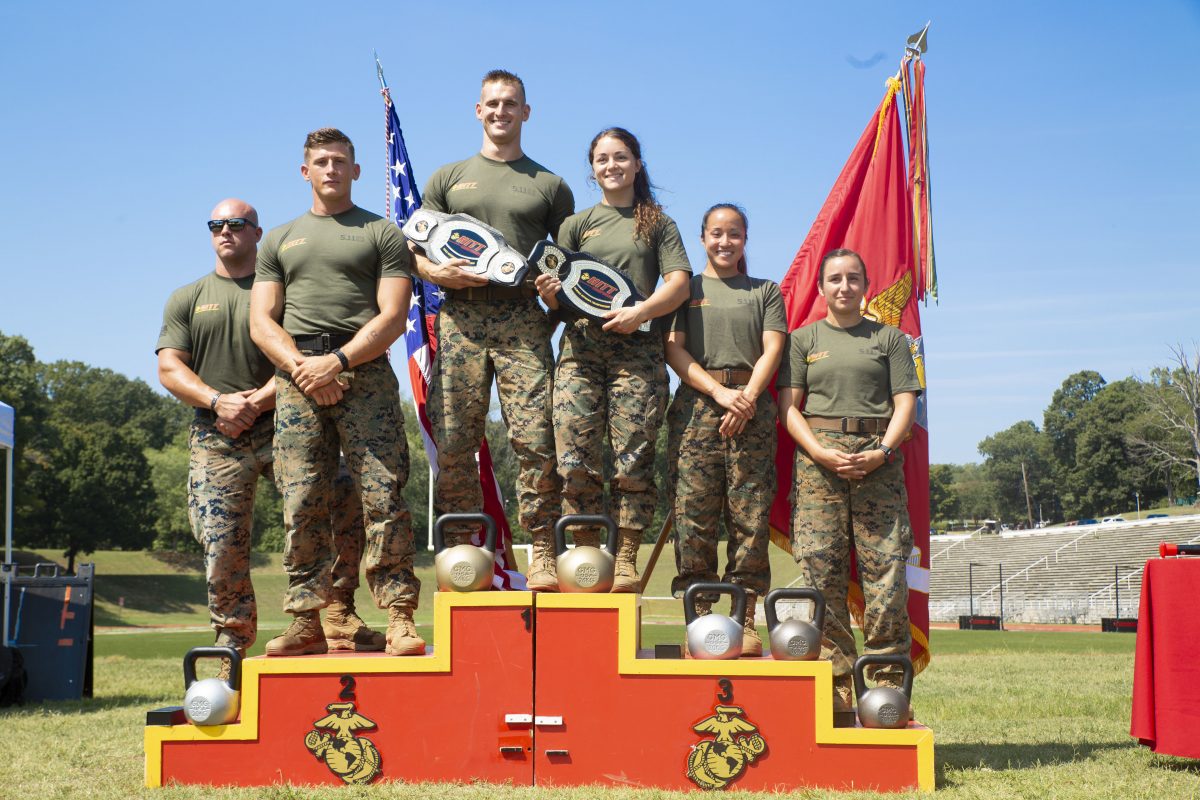 The first place male and female winners of the competition were Sgt. Kevin Fisch, representing Marine Corps Base Camp Pendleton, Calif. and Cpl. Alexandra Martin, representing Marine Corps Base Camp Butler, Okinawa. Fisch won first place for the second year in a row, and also competed on season 11 of the television show American Ninja Warrior, which is an obstacle course competition series.

The Marine Corps does two things for America. we make Marines and we win battles. We run the HITT program because this is one of the best ways to train to fight and win in combat. Lt. Gen Rocco, Deputy Commandant for Manpower and Reserve Affairs

“I feel like I was part of such a big thing going on here,” said Cpl. Martin, who is a HITT Level I instructor. “There was so much research put behind it, and so much hard work going into creating all these events.”

The championship spanned over four days and consisted of seven separate events, which challenged the Marines physically and tactically. They were made to perform combat fitness tests, live-fires, weighted vest runs, obstacle courses, and more.

“I feel like the biggest thing I got out of the championship, whether I would have won or lost, is the camaraderie I experienced here with every rank, from chief warrant officers, officers, staff NCOs, NCOs, and junior Marines,” said Martin. “Everyone was motivating each other, and we were all going through everything together. That was an amazing thing to experience.”

Both first place winners admitted that the competition was challenging and exhausting, but they claimed their success was due to being well-rounded athletes.

“If you’re weak in an area, you need to attack it and make it one of your strong points,” advised Fisch.

West Virginia University also collected data on the Marines before, after, and during the events and provided the competition an obstacle of their own design with the intention of identifying physical and cognitive predictors of the Marines’ performance.

Lt. Gen Rocco, Deputy Commandant for Manpower and Reserve Affairs, encouraged the Marines who participated to bring what they learned back to their units. He described the HITT program as “a comprehensive, combat specific strength and conditioning program that promotes power, speed, agility, and endurance, while reducing the likelihood of injuries.”

“The Marine Corps does two things for America: we make Marines and we win battles,” said Rocco. “We run the HITT program because this is one of the best ways to train to fight and win in combat.”

“Marines wearing this uniform know we have to be ready to deploy at a moment’s notice.”

One thought on “MARINES TRIUMPH THROUGH 5TH ANNUAL HITT CHAMPIONSHIP”