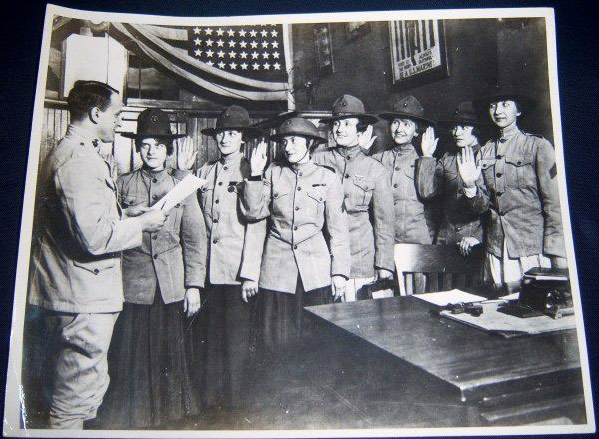 I have attached a photo that I have of the first Women Marines taking their oath. At the time, they were designated "Marinettes".

On the back of the picture is their names and the Captains name performing the ceremony typed in red ink. Dated 1919. Are there any readers that has ever seen this particular picture? It was placed in the sunlight and I copied with my camera.

Comment by Jerry D. referred the Women Marine's Association as a reference with some bad information put into your news letter. I clicked on and they have this picture shown that I submitted for the readers to enjoy a little history. The site has the first Woman Marine that was sworn into the Marine Corps with the last name of Johnson with the date of 13 Aug 1918. You put a lady in touch with me from said web site and I corresponded several times with her and thanks for your help..I submitted to her exactly what is printed on the back of said photo.

The information on the back of this picture shows the picture was taken 17 Aug 18 by a photographer named Paul Thompson. Must have been lots of ass kissing going on in four days for the rank obtained according to the information describing the picture by the association. I don't know who this Jerry D. is, but he should get his facts together, must be a civilian for he didn't attach any rank to his handle. With his saying "Looks as if they are requesting permission to make a HEAD CALL', Bull, for without a doubt they repeated the same oath that I did in 1962, to defend the Constitution and do what they were told to do…In their case, recruited in New York with orders to serve as "Steno's" at the Adjutant's Office, Head Quarters Marine Corps replacing those men to go fight the war in Europe.Just saying! HMcKinley M/Sgt Retired U.S.M.C.