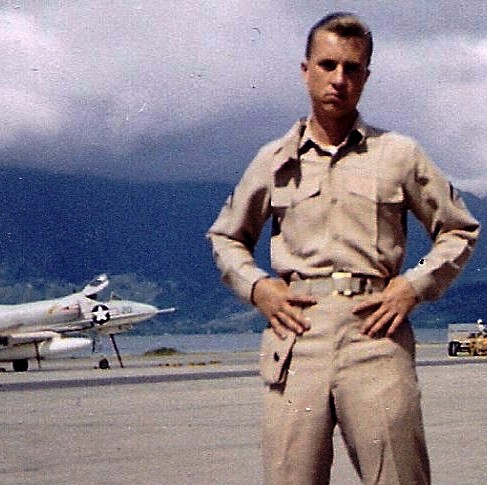 These stories were collected, compiled and edited over several years. Some of them have appeared in the Sgt. Grit newsletters at grunt.com, however this is the first time they have been gathered together to give readers a firsthand account of what life was like at MCAS Kaneohe during the early 1960s. Norm Spilleth was a Marine Corps Corporal and Plane Captain from 1960 to 1964 who served in VMA-212, the Devil Cats. Norm said that his time in VMA-212 was the most significant years of his life. When he checked into VMA-212, they were still flying the F4J-B Fury jets, but soon transited to A4D Skyhawks. He remembers losing four airplanes, two pilots and two enlisted men to accidents during that time. He had a whole lot of memories to share about his experiences with VMA-212 and insights into several of the accidents. Norm also recounts his adventures in the Marine Corps beginning from his basic training at Parris Island. Most of the stories were written by Norm Spilleth, except otherwise noted by other Kaneohe Marines. All the stories happened during the early 1960s. Be forewarned, some of the stories and language are colorful to say the least. Only minor editing was done to make it easier to read. Pictures were added from Norm’s personal photo collection as well as a few others to illustrate the stories.

I went to Parris Island on August 4, 1960, platoon 374, 3rd. battalion. Graduated 12 weeks later and went to ITR (Infantry Training Regiment), Company B, Camp Geiger, Lejeune, NC for 1 month. Then 20 days leave back home to Jersey. After Leave, took a train to Memphis and NATTC at Millington for aircraft mechanic school. After completion of the ADJ, jet engine mechanic course, I was assigned to 1st Marine Brigade, MAG13, MCAS Kaneohe. Completed another twenty days leave back in Jersey before leaving for a staging battalion in Camp Pendleton and was there a month or so waiting for a full complement of troops to board a ship in San Diego. In the mean time the Corps sent us air wingers down to El Toro for A4D school for (I think a week or two). After the A4D School, we rejoined the staging battalion and boarded the USS George Clymer in San Diego harbor and sailed to Hawaii in a convoy with several other ships. The voyage to Hawaii took nine days. I have a lot of memories of those days, but not the exact dates. As we approached Pearl Harbor, we were all ordered below until the ship docked. It was very close and hot in the hold and they kept us there for a few hours until the officers cars were off loaded from the compartment above us. It was an education in the difference between officers and enlisted that stayed with me when I had my “shipping over lecture”. So began my two years on the rock. I think it was May of 1961 to May of 1963. Returned to the mainland on a converted liner, spent a week or 10 days on Treasure Island waiting for orders, but also got some memorable liberty, then flew back east for a thirty day leave in Jersey. After the shore leave, I went to my last duty station, VMGR-252, at C-130 squadron at Cherry Point, NC. I got discharged on August 5th, 1964, the same day as the Gulf of Tonkin incident, the official start of the Vietnam War.

One thought on “Memories Of A Kaneohe Marine”