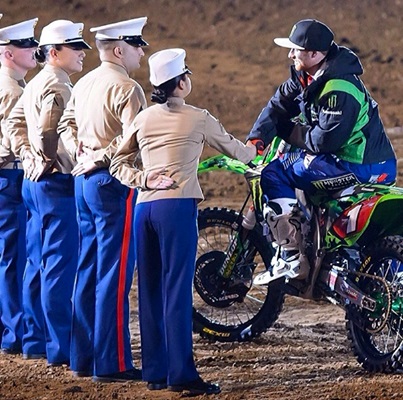 On Saturday, February 8th. I attended the Monster Energy Super Cross in San Diego. It was Military Appreciation Day, so there were lots of Marines and other service members there.

Just prior to the qualification races, the big stars were introduced, and they each did a practice lap. In front of the start line there was a squad of Marines. After Chad Reed #22 did his lap, he rode by the Marines and held out his hand to slap their hands, a few of the Marines did likewise. When Ryan Vilopoto #1 did his lap, he stopped in front of the Marines, and shook each of their hands individually. It was a touch of class, and it made me happy to see there are young people like him out there, who appreciate what the Military is all about.