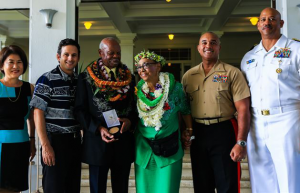 Known more professionally for his work involving the eradication of fruit flies, Dr. Ernest James Harris, Jr. received the highest civilian award in the United States for his contributions as a Marine.

“I’m proud to join in the presentation of the Congressional Gold Medal to Dr. Ernest Harris, the highest civilian award bestowed by the Congress of the United States,” said U.S. Sen. Brian Schatz. “We are here to recognize the unwavering perseverance and courage of Dr. Harris and his fellow Montford Point Marines that inspired change in the Marine Corps.”

On Nov. 23, 2011, President Barack Obama signed into law the legislation to award the Congressional Gold Medal to the Montford Point Marines. This award recognizes Montford Point Marines’ contributions to the Marine Corps and the United States of America from 1942 to 1949, during a time of hardship and segregation.

Many of the Montford Point Marines attended the award ceremony held at the Capital Visitor Center, District of Columbia, June 27, 2012. Those not able to attend received the award through mail or during special ceremonies.

“The Montford Point Marines were warriors, they fought not only home but abroad during hard times, and it is worthy of this medal,” Cavanaugh said.

The opportunity for African-Americans to enlist in the Marine Corps came in 1941. A year later, they began their train in at Camp Montford Point, North Carolina, during a time and place where racism and segregation were a part of everyday life. Schatz explained that despite segregation of the Montford Point Marines, they had excellent performance during Peleliu, Iwo Jima, the Chosen Reservoir, and in Vietnam.

“Anyone who knows a Marine, knows they are a Marine regardless of race, religion or creed and nowhere this is truer than in war,” Schatz said. “As one Montford Point Marine recalled later in life, ‘a bullet doesn’t care what color you are, it will kill you just the same.’”

Harris explained how he thought he could fulfill an exciting career as a pilot or mechanic in the Marine Corps, but ended up cleaning rifles and artillery weapons.

“I wanted to get some extra training to be able to get a job and become a professional,” Harris said.

Harris left the Marine Corps, and with the support of the G.I. Bill, finished college at the University of Arkansas-Pine Bluff with a major in biology and a minor in chemistry. Later, he submitted an officer’s package to the Marine Corps but was denied entry due to medical reasons.

Harris earned a Master’s Degree from the University of Minnesota and holds a doctorate in entomology from the University of Hawaii. He worked for more than 40 years as a research entomologist for the U. S. Department of Agriculture and is known for the sterilization of fruit flies, which allowed fruit to be exported all over the world.

“Let us all commit to carrying forward your story and the memory of the Montford Point Marines so that we will always remember your service to our great country,” Schatz said.

Sgt Grit wants to hear from you! Leave your comments below or submit your own story!