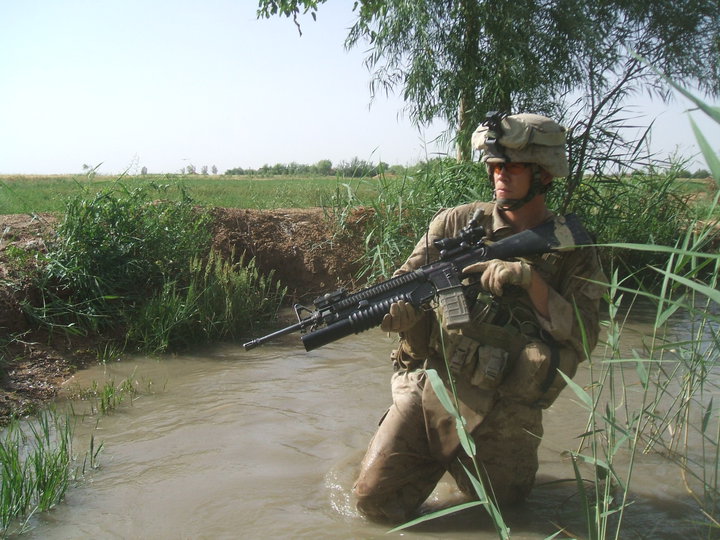 After reading the latest news letter calling for new stories from new veterans I decided to share one my own.

It was 2010 and I was assigned to 1st Battalion 6th Marines Alpha company 2nd platoon. I was a team leader with 1st squad.  February 13 found us assaulting the City of Marjah as the assault force for Operation Moshtarak.

That morning at 0200 the entire loaded in to helos and landed in the middle of the city. My company's objective was to take the market and set up a base for our push west.

When i stepped of the bird with all my gear I was immediately greeted my mud. Under the wait of my gear myself and the rest of the squad got mired in it. Once i got my self out I help my team and check to make sure there gear was squared away.

According to the plan we were to move in to the market, But we waited till almost dawn to do so. The company was set up in a hasty defense and waited.

You wouldn't think but it was cold as hell that morning. I put my team on 50 percent watch while we waiting. But before i could sleep I had to help another plt. out with an APODS. When we landed several people snapped ankles and shin on the way out the bird. Which ment my team had to carry it now.

As the sun rised so did the enemy. We started to recived sporatic fire during the morning while we made our way to the building. I was tasked to clear a route thru a field t the edge of town. Which ment i just walk a line thru the field the company would follow my dropping chem light and hoping i didnt step on an Ied.

That was never racking even as the company watched me. Several enemy jump up from positon to try and shoot me and were quickly silenced my our STA teams.

Once i reached to other side I called back the all clear. The company soon secured the compound we would use to support our push west.

Thank you for letting me share my story from afghanistan.