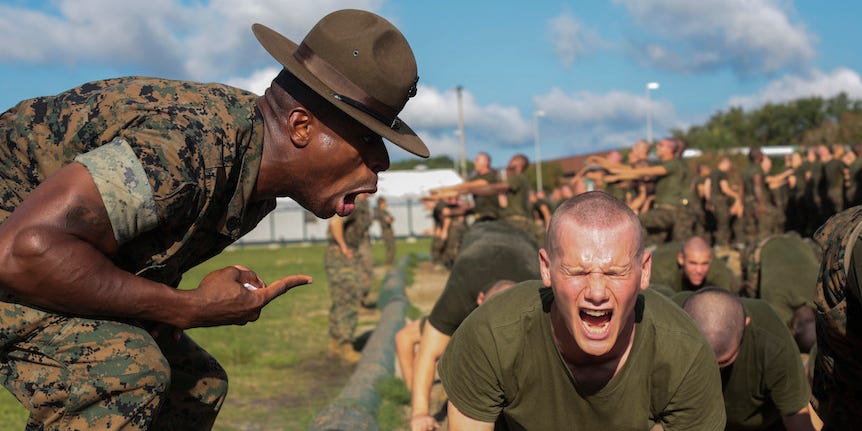 After 13 weeks of boot camp, during which about half of all
Communication coming down from your DIs is expletives, the most
common verb, pronoun and adjective in your vocabulary becomes the
crude, four letter word most commonly used to describe a most beautiful
and natural function of mankind. All Marines have heard the story of the
young Marine home fresh from boot camp. Previously quite outgoing, he is
strangely quiet during the first, special, homecoming dinner – attended by
favorite aunts, uncles, grandparents and siblings, all beaming with pride at
their young Marine. Mom, sensing some tenseness, asks “Johnny, you are
being very quiet. Is there something wrong?” Johnny responds “No, Mom.
I’m just afraid if I talk too much, I’ll f**k up!” Obviously, in “polite company”,
freshly anointed Marines have to be on their toes.

LIKIN’? LOVIN’? THERE IS A DIFFERENCE
The longest month of my life was my first three days of boot camp. It seemed
virtually impossible to say anything to a DI that was correct in his eyes, unless, of
course, you were agreeing with his assessment that you were possibly the
dumbest, most worthless specimen that had ever crapped between a pair of
boondockers. This was one of the first things we learned. In fact, sometimes there
just wasn’t a “correct” answer.
We had found out within minutes of arriving at MCRD that just about any
infraction, whether real or imagined, was punishable by death. Well, maybe not
death itself, but you still thought you were in Hell. Actually one DI told us that it
wasn’t legal for him to kill us but there was no statute keeping him from making
us wish he would and just get it over with. So, when a DI asked a question a
wrong answer would usually be accompanied by summary judgment and
punishment.
Either the second or third day – with so little sleep you couldn’t tell when one
ended or the next started – we were in formation waiting to do something or
other. Not wanting to waste any time our DI kept us at attention while he
meandered between the ranks raising hell with first one boot and then another.
He was in the process of chewing on a recruit in the rank in front of mine when a
guy to my right, instead of holding “eyes front”, let his eyeballs shift to the action.
Big mistake! The DI forgot about the guy he had been working over and charged
through to confront the miscreant.
“What the f**k were you looking at, Sh*tbird?!!” He’s got his face shoved within
an inch of the recruit’s face.
“Sir! Nothing, Sir!”
“Bullsh*t!! You were looking at me, weren’t you?”
Busted. “Sir! Yes, Sir!”
“Why were you staring at me, Sh*tbird? Because you like me? Is that it?”
The recruit is nervous now. “Sir! No, Sir!”
The DI straightens up, the anger replaced by a quizzical look, a little hurt in his
voice. “What do you mean, you don’t like me? Why not? What’s not to like?” He
lifts his arms up, palms up and turns a circle. “Is it the way I dress?”
Now only a fool is going to criticize that uniform. “Sir! No, Sir!”
“So you like the way I dress?”
“Sir! Yes Sir!”
“And there’s no other reason you don’t like me?” A little edge is back in his voice.
“Sir! No, Sir!”
The Sergeant smiles. “So, you do like me?”
“Sir! Yes, Sir!”
Now a snarl. “Well, likin’ leads to lovin’, a**hole. And lovin’ leads to f**kin’! Do
you believe you’re going to f**k me, you worthless piece of sh*t?!!!
Thoroughly confused, the recruit croaks “Sir! No, Sir!”
The Sergeant is shocked again. “Why the hell not? What have I done? What
happened to likin’ and lovin’? Do you think you’re too damned good for me?”
The boot’s head is spinning. “Sir! No, Sir!”
“So, you DO think you would f**k me?”
“Sir! No, Sir!”
A malevolent look comes over the Sergeant’s face. “Well, you got that right, sh*t-
for-brains! If anybody around here is going to get f**ked over, it sure as hell ain’t
going to be me. And the next time I see you eyeballin’ all this…” and he sweeps with
both hands down his body, “instead of having your eyes forward where they
belong, I will f**k over you and there ain’t gonna be any romance in it! Are we
clear?”
“Sir! Yes, Sir!”
Like I said, no correct answers.
This excerpt is from my book of funny boot camp experiences “SH*TBIRD! How I Learned To Love The Corps.”
Jim Barber
Platoon 324
March 1958
MCRDSD

7 thoughts on “NO RIGHT ANSWERS”