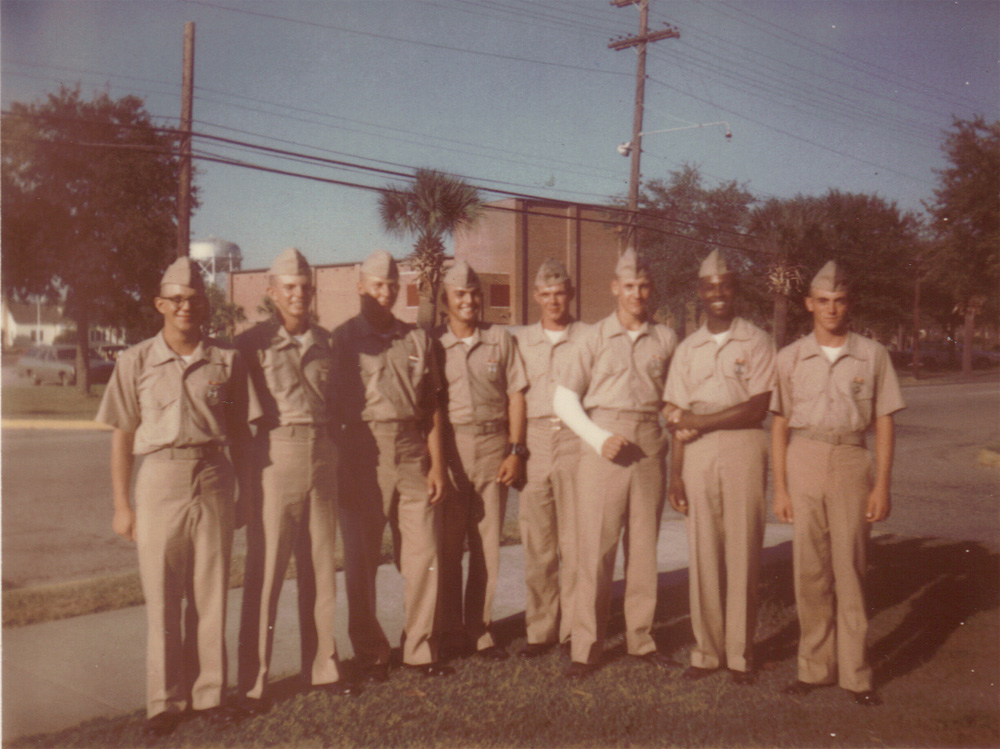 On July 5th, 1970 I arrived at Parris Island after a long bus ride from Cleveland, Ohio. Yes, there were yellow footprints. I was 17 at the time and my Dad had served in the Army so naturally, I had to join the Marines. Anyway, I was a pretty squared away recruit. Tried to just look forward, stay under the radar and get the hell out of there as quick as I could.

Mind you, I had signed up for a 4 year hitch. I cannot for the life of me remember what platoon I was in but I do remember wood barracks and was on the second floor. To make a long story short, about 2 weeks before we were to graduate I cracked a bone in right forearm. I have no idea how it happened only that my right arm started to swell up like a summer sausage and at night the pain was getting pretty uncomfortable. At that time we were full sleeve fatigues, buttoned at the throat for PT and drill…… which kept me undetected and under the radar. I would sneek into the head at night to wrap a cold towel around my arm fighting the swelling and my fears, my huge fears, that I would be sent back to start all over again in yellow footprints. I was bummed, really bummed. Anyway, about a week before we were to graduate we did some small obstacle course and I could not make the rope climb. That arm was broke and there was no hiding it anymore. My SDI, SSGT Chadwick took one look at my arm and hustled me of to sickbay, x-rays and a subsequent cast. I cannot put into word almost 47 years later the feelings of despair sitting in that sickbay ward room just KNOWING I was going to have to do Parris Island all over again. And I was so close…….. After the cast, they assigned me to Casual Company for another couple of days all the while I was dreaming on how to steal a car to get off of the island because there was no way I doing boot camp all over again…..! After 3 days in Casual Company SSGT Chadwick came over picked me up and took me back to the barracks where he had assembled what was left of our platoon (after 10 weeks) and made an announcement that “I would be graduating with the rest of the class”. Guys, I had tears my eyes. At that moment my ‘bunky’ came up to me and he and SSGT Chadwick took me to my footlocker/bunk and showed me that while I was in sickbay my bunky, Dan (can’t remember his last name but that’s him standing to my left in the group photo) had pitched-in and shined all my brass, boots and shoes and generally got ALL of my gear squared away for graduation. I will never, ever forget that moment. As you can see in the photos I graduated on the parade deck and my Dad came down also. My platoon moved on. I stayed in Casual Company as a brig-chaser for another 2 months before the cast came off and I could head up to Lejeune to complete my training, then on to 3/7 at Pendelton/ Keflavik, Iceland/ and Quantico. My DI’s were SSGT Chadwick, SGT Evans and a corporal whose name I can’t remember. Got out a Sergeant and like most Marines I’ve talked to over the years they all say they should have stayed in. I agree. Best decision I ever made was the Marine Corps. Worst decision was not staying in. That’s my story. I would welcome any contact from Marines in my platoon as I’ve lost photos, year books,etc…. Semper Fi. Sgt Dennis Nowak .