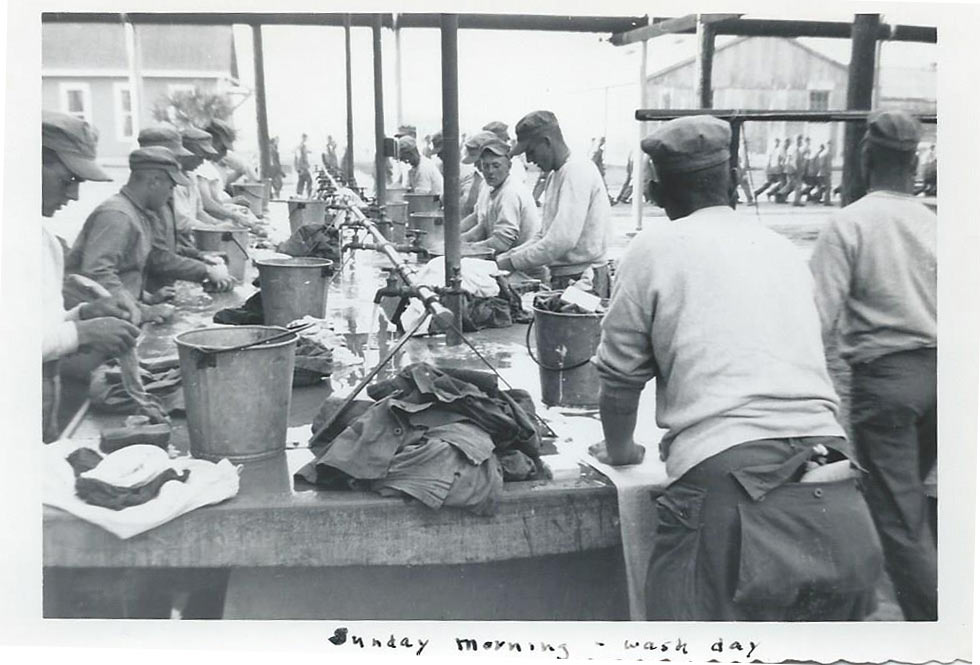 You requested stories of PI experiences. Here are a couple of mind benders, not physical incidents but nevertheless, shook us up. We polished our dress shoes for weeks, never wore them with greens until late in the program. We were told to put on the dress shoes one evening when dressing for chow. On the way I guess we were all looking down at our spit shines, bobbing along. We were halted, told to bow our heads and stare at our shoes for a few minutes before going on to the mess hall. Another time we must have been slow in getting into greens for chow or the squad bay was messed up, because we had to go back in change into utilities with field jackets. Too slow, back again, get into greens with overcoat. In ranks we were told to open the overcoats. Some guys did not have their blouses buttoned. Back into the barracks, change again. We did this about 7 or 8 times before going to chow. Once there Sgt Brown announced that after chow we were going to the movies. However, before that we were to take a test on the M1. There were 75 of us in the Platoon. We could have 10 incorrect answers among us. Needless to say we did not go to the movies and I doubt that we would have regardless of the test results. We were near the end of the 8-weeks and when getting into greens for chow we were instructed to put our emblems on our covers and jacket lapels (Ike or Battle Jacket). While in line waiting our turn to enter the mess hall, another DI came over to our DI and berated him for allowing us to wear emblems when we were not yet MARINES, Sgt Brown made some excuse and told us to remove the emblems and put away until graduation. It was a cold January and February, puddles exposed to the sun did not thaw. We rarely wore field jackets or gloves, just our cotton utilities, no great flannel shirts that hung in the squad bay. One morning in a weak moment of compassion, while in ranks waiting to get in the mess hall for breakfast, we were called to attention, given the "at ease" command, cross our arms over our chest and put our hands in our arm pits. Other than a very few times did any of our DI's do anything physical to anyone in the platoon.

We were an older group, most had been out of high school a while, some in college, etc. Most probably enlisted to avoid the draft. I got my notice while in Boot. This was Plt 19, Second Bn, graduating about the first week of March, 1951. We were an honor platoon, of course. The photos are of Risher, Starling, Dean and Barton, all from Charleston, S.C. If I recall correctly. A fantastic experience and I wouldn't trade it for anything.

P.S. The photos were taken the last Sunday at PI. I am sure that my camera was not available before that. We are washing clothes on concrete wash racks with cold water and scrub brushes, hung up with tie-ties (short pieces of twine), all from our bucket issue. If one did not go to church you had more free time to wash and not be bothered by you know who.